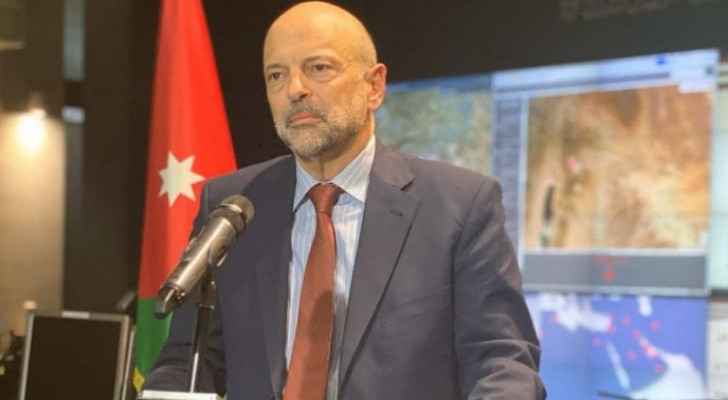 On this day last year, former Prime Minister Omar Al-Razzaz announced the activation of the Defense Law in Jordan, in an effort to tackle the coronavirus pandemic.

On March 17, 2020, Razzaz said during a press briefing at the National Center for Crisis Management, that the defense law will be applied in the narrowest limits in order to keep the rights of citizens intact.

He added that a distinction must be made between the right to express an opinion, which is protected, and spreading rumors, and false news.

He indicated that the government will take measures to reduce the burdens on citizens and the economic sector.

A Royal Decree was issued in approval of the Cabinet resolution, announcing the implementation of Defense Law No. 13 of 1992, throughout the Hashemite Kingdom of Jordan, as of March 17, 2020.

- Announcing Application of this Law:

a. If anything occurs that requires defending the country in emergencies that threaten the national security or general safety in all or one part of the kingdom due to wars, a state leading to them, disorders, internal armed uprising, general disasters, outbreaking of plague or epidemic, this Law becomes effective by a Royal Decree issued based on the decision of the Cabinet.

b. The Royal Decree includes explanation of the state that required this Law to be effective, the area
and date it will be effective in.

c. Ceasing this Law is announced by a Royal Decree issued based on the decision of the Cabinet.

- Persons Authorized to Apply the Law and the Eligibilities:

The Prime Minister is in charge of applying the provisions of this Law to take measures and procedures necessary to secure general safety and defend the kingdom without being restricted by the provisions of applicable normal laws and he practices his eligibilities according to written orders and has the right to authorize all his eligibilities or some of them to others.

a. The application of this Law is the responsibility of the Prime Minister to take measures and procedures necessary to secure general safety and defend the kingdom without being restricted with the provisions of normal applicable laws.

b. The Prime Minister practices his eligibilities according to written orders.

c. The Prime Minister has the right to authorize all or some of his rights to whom he sees competent in all or one part of the kingdom and according to the conditions and restrictions he specifies.

The eligibilities of the Prime Minister provided in the Defence Law are those listed in Article (4)
thereof.

The Prime Minister has the right to practice the following eligibilities:

a. Restricting personal freedom in meeting, moving and staying, and catching suspects or persons dangerous to national security and general order and arresting them.

b. Authorizing any person to do any work or perform any service according to his abilities.

c. Searching people, places and vehicles without being restricted to the provisions of any other law, and ordering using suitable force in case of disobedience.

d. Placing seizure on movable and immovable property and delaying settlement of due debts and
obligations.

e. Forbidding, limiting or restricting importing, exporting or moving materials from one place to another, restricting dealing with them, prohibiting hiding, damaging, buying, bargaining them or specifying their prices.

f. Capturing any land, building, road, or water or energy source, establishing on them works related to defence, removing any trees or establishments on them, and giving orders to manage or utilize them or regulate their use.

g. Evacuating some areas or isolating them and imposing curfew in them.

h. Determining schedules for opening and closing all or some of the public shops.

i. Regulating means of transport and movement and specifying them among the different areas, and closing any road, passage or water passage or changing its route and forbidding movement on it or regulating it.

j. Monitoring letters, newspapers, published material, brochures, paintings and all means of expression, propaganda and advertising before publishing, holding, seizing, suspending them and closing the places they were prepared at.

l. Canceling licenses of weapons, ammunitions, fireworks and explosive materials or those used in manufacturing explosives, forbidding their manufacture, selling, buying, moving or dealing with them, and giving orders to surrender and seize them and close shops that sell or store them.

m. Forbidding manufacturing devices for communication, selling, buying, or holding them, and giving orders to surrender them and seize them.

In its Article number (10), the Defence Law provides that work with any text or legislation that opposes any provision of the Defence Law and the orders issued according to it should be ceased.

Working with any text or legislation that opposes any provision of this Law and the orders issued according to it is ceased.

Tuesday, Jordan recorded 69 deaths and 8,910 cases. Currently there is a 7pm curfew for citizens, and a 6pm curfew for establishments, until 6am, and a total lockdown on Fridays in order to curb the coronavirus pandemic which has affected all aspects of Jordan, including the economy, the healthcase system, and the wellbeing of citizens and residents.