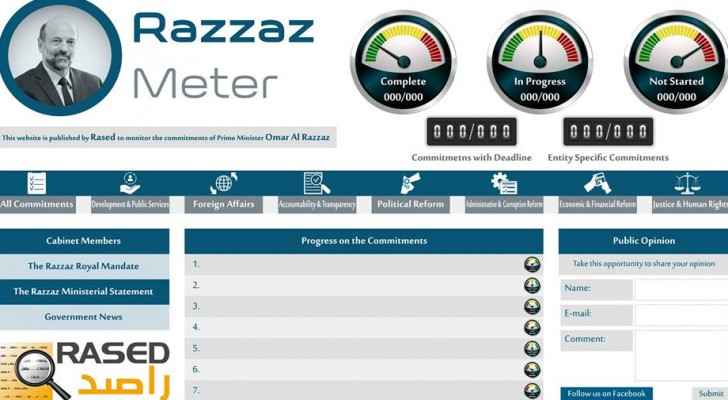 An online interactive platform entitled “Razzaz Meter” will be launched later this week for the purpose of evaluating and monitoring the Government’s performance.

The (www.razzazmeter.org) website is created by Rased, a non-governmental organization, designed to provide a clear assessment of the Cabinet’s commitment to implementing its own announced policy-statements and its publicized official plans and promises.

The website aims to raise public awareness of the government’s future plans, where each plan is listed under one of seven categories: Political Reform, Economic and Financial Reform, Administrative and Corruption Reform, Accountability and Transparency, Justice and Human Rights, Development and Public Services, and Foreign Affairs.

Once a new policy is announced, the website will associate it with three meters: Complete, In Progress, and Not Started.

Rased announced that the website will be launched once the Parliament grants its 'vote of confidence' to the newly formed government, which is expected to take place after the Prime Minister delivers his policy speech later today, Monday, June 9, 2018.