The fire was caused by a group of displaced Syrians who wanted to ignite chaos. 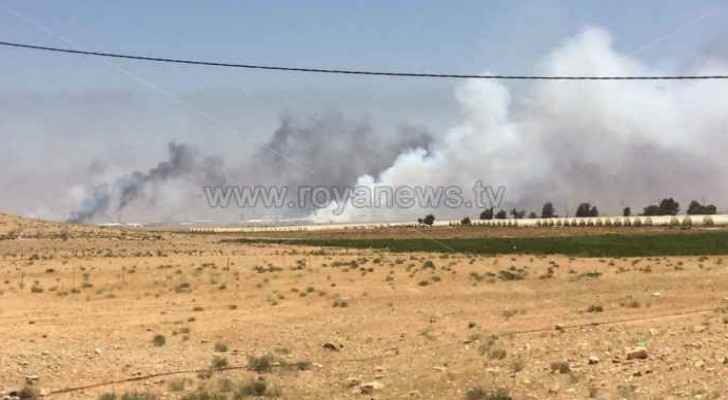 Commander of the Northern Military Zone Brig.Gen Khalid Masa'id confirmed that the fire, which ripped through a factory of chemical substances near the Jordanian-Syrian border on Thursday, was caused by a group of displaced Syrians who wanted to ignite chaos among their fellows hoping to rush “thousands of displaced people to head towards Jordan.”

In a statement issued on Friday, the Jordanian Ministry of Health said that the aftermath of sulfur-burnt fumes, which spread over neighboring areas, caused a total of 43 cases to seek medical help, most of which were Syrian refugees residing in nearby camps.

The Ministry confirmed that patients, who mainly suffered symptoms of respiratory distress, received the required treatment offered through its various medical centers and hospitals as the following: 15 cases at the Northern Badia Hospital, 15 at Umm al-Qatain Health Center, and another 13 at Mukayfitah Health Center.

The Ministry added that its medical staff have done a great job in dealing with the emergency both efficiently and professionally. Patients received the necessary treatments and were sent back home without the need for admitting any of them. The Ministry also confirmed that, as of Friday, no new cases were reported.