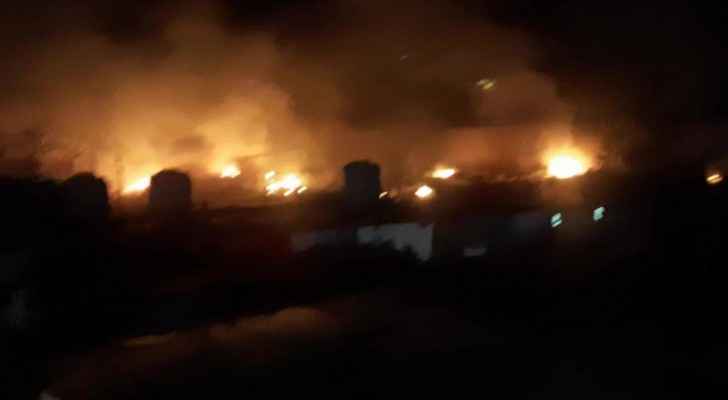 The official Lebanese News Agency reported that a number of citizens in northern Lebanon set fire to a Syrian refugee camp on Saturday night after a quarrel broke out between a member of their family and "Syrian workers."

The United Nations High Commissioner for Refugees confirmed that a large fire broke out in a refugee camp in the Minya area and that a number of the wounded were taken to a nearby hospital.

"The fire spread to all the camp residences," built of plastic and wood materials, and in which about 75 Syrian refugee families reside, UNHCR spokesperson Khaled Kabbara told AFP.

The spokesman explained that the size of the fire was huge due to the highly flammable materials built, including the camp housing, and the presence of gas bottles in it.

"Plastic and wood are two materials that are highly flammable on their own, so what if there are also gas bottles?" He said.

The agency stated that, following the confusion, “a number of young men from the Al-Mir family intervened and deliberately set fire to some tents for the displaced Syrians in Minya,” before “civil defense vehicles intervened and worked to extinguish the fire, while an army and security force intervened to control the situation.”

A security source told AFP that gunshots were heard.

About 1.5 million Syrians reside in Lebanon, about one million of whom are registered with the UNHCR. They live in difficult humanitarian conditions, exacerbated by the economic crisis, which was deepened by the outbreak of the coronavirus and then by the catastrophic explosion that occurred in the Beirut port last August.

Over the past years, Lebanon has witnessed, from time to time, racist campaigns and hate speech against refugees and calls for their deportation.

Lebanon suffers from a severe economic crisis, and many among them see the presence of refugees as an additional burden for the economy.

At the end of November, about 270 Syrian families left the town of Bcharre in northern Lebanon, fearing reprisals after a Syrian youth was accused of killing a resident of the town.

One dead, several injured after building collapses in ....

One dead, several injured after building ....

One dead, several injured after building ....

One dead, several injured after ....