Jordan to hold talks with Russia over Syria

At least 270,000 Syrians have been displaced during the last few days. (The National) 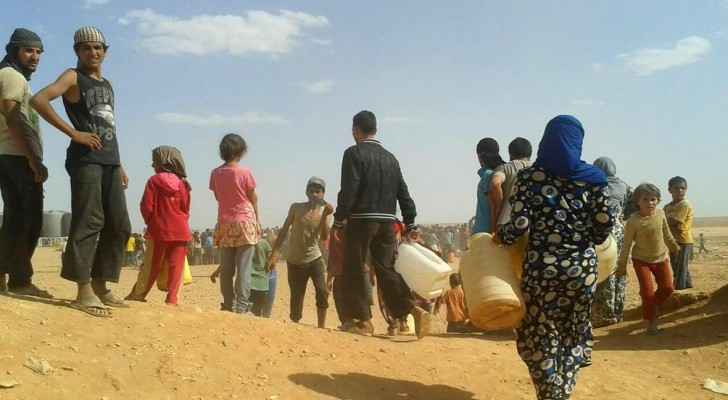 Foreign Minister Ayman Safadi will hold official talks with his Russian counterpart, Sergei Lavrov, in Moscow on Wednesday over a ceasefire in southwestern Syria, that would pave the way for a peace deal, the Prime Ministry reported.

During a meeting with the UN Resident Coordinator, Anders Pedersen, the representative of the UN High Commissioner for Refugees (UNHCR), Stefano Severe, and the Head of Office for the Coordination of Humanitarian Affairs (OCHA), Sarah Muscroft, on Monday, Safadi discussed the necessity for humanitarian aid inside the Syrian territory.

According to the United Nations, at least 270,000 Syrians have been displaced during the last few days, with most of them heading to the Jordanian borders and the Israeli-occupied Golan Heights.

“I look forward to a frank discussion to discuss how to arrive at a ceasefire as soon as possible. There are speedy developments on the ground and the meeting will hopefully result in more understandings and steps forward, containing the crisis and preventing more devastation,” Safadi said.

The minister and the representatives of the UN affirmed the strong partnership between Jordan, that hosts about 650,000 registered refugees, and the UN organizations in the humanitarian side, and the continued cooperation to meet the needs of the Syrian refugees in the kingdom, as well as in the delivery of assistance to the displaced Syrians across the borders.

Safadi pointed out that hundreds of trucks laden with relief supplies had crossed into Syria from Jordan over the past few months, and that there was no shortage of supplies in humanitarian aid, which is now stockpiled along the Jordanian border, adding that it was up to the UN to get the necessary approvals from Damascus to allow in supplies inside the Daraa province.

“There are tens of trailers that are on the Jordanian border so the issue is not about the abundance of humanitarian aid, it’s about finding the right conditions across the border to send the aid. Jordan will continue to be a gateway for aid,” Safadi said.

Jordan has been facilitating talks between rebels and the Russians that would end the fighting and restore state sovereignty. Opposition negotiators had held meetings with Russia to try to reach a deal for all of the Daraa province, and demand the Russian military police to play a role in peacekeeping, asking Jordan to act as a guarantor to a deal.