Unions complex during the strike on June 6. 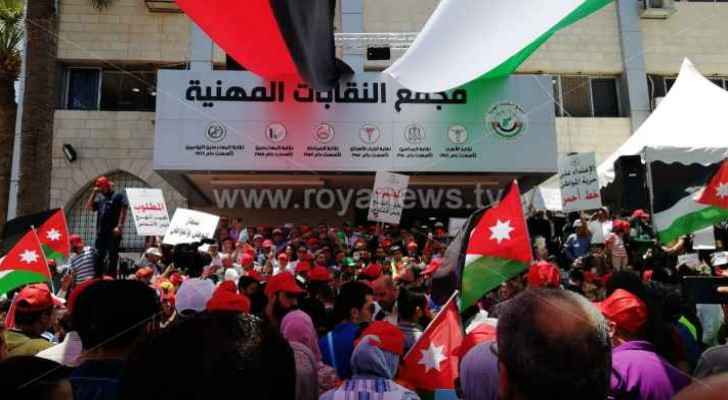 The recently amended Civil Service regulation also received a heavy dose of criticism, which was evident from signs brandished during the strike.

Thousands of union members protested at their place of work starting 9 a.m. this morning, staging a sit-in at the Unions’ building in Shmeisani at 1 p.m.

Lawyers from Jordan Bar Association were also present asserting that “The infringement on citizens’ freedom is red line.”

Other placards also called for the dissolving of the parliament and voiced the “public demand” to put a halt on policies that will lead to the impoverishment and “starvation” of the citizens.

Another sign proposed that in addition to rescinding the ITB, the government should implement a law that prosecutes those who can’t justify how they have acquired their wealth.

Under the auspices of the Unions’ Council, union members filled the yard, waving banners and denouncing the economic policies put forward by the former Cabinet of PM Hani Mulki.

Ahead of Mulki’s resignation on Monday, Unions’ Council President, Ali Abous, stated that “the Council unanimously agreed for a general strike to be carried out across the kingdom on Wednesday.”

Despite the Unions’ Council asserting that the strikes would continue until the ITB was repealed, some of its members expressed doubts after their meeting on Tuesday.

Newly appointed Prime Minister, Omar Razzaz, has has yet to announce his choices for Cabinet members. Meanwhile, it is unclear whether unions will continue to escalate their protests.