At the funeral of an 8-month-old baby in Gaza, who died from Israeli tear gas. (Twitter) 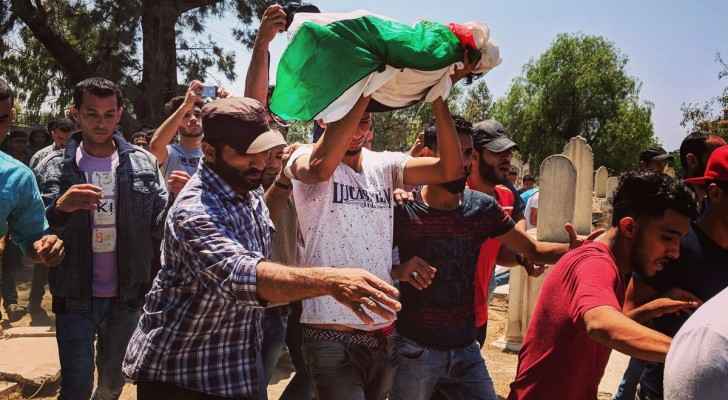 The Palestinian Ministry of Health said on Tuesday that the death toll in Gaza has risen to 61 this morning, after two young men, aged 30 and 16, and a child succumbed to their wounds from yesterday’s clashes.

During the violent confrontations with the Israeli forces along the Israeli-Gaza border, more than 2,771 Palestinians were also injured. Of those wounded, 225 were children and 86 were women.

Tragically, an 8-month-old baby died from tear gas during the protests. The child’s mother was at Monday’s protests, but when the baby began crying uncontrollably, her uncle brought her to her mother. Her funeral was held earlier today.

That wasn’t the only funeral held today. Tens of thousands of Palestinians attended the funerals of those killed by Israeli fire during Monday’s protests, according to Haaretz.

Other funerals took place in Jerusalem on Tuesday as well; they were held for the Palestinians killed by Israeli forces during protests at the relocation of the US Embassy to Jerusalem, according to The Guardian.

Palestinians are expected to continue their protests in Gaza and the West Bank after the funerals. Earlier on Tuesday, about 200 Palestinians protesters clashed with Israeli forces in Bethlehem, while another 100 demonstrated in the Palestinian city of Ramallah.

Today, 15 May, is a bitter day for Palestinians as it marks Nakba Day; the day Palestinians mark the 70th anniversary of the expulsion of hundreds of thousands of people during the creation of Israel.