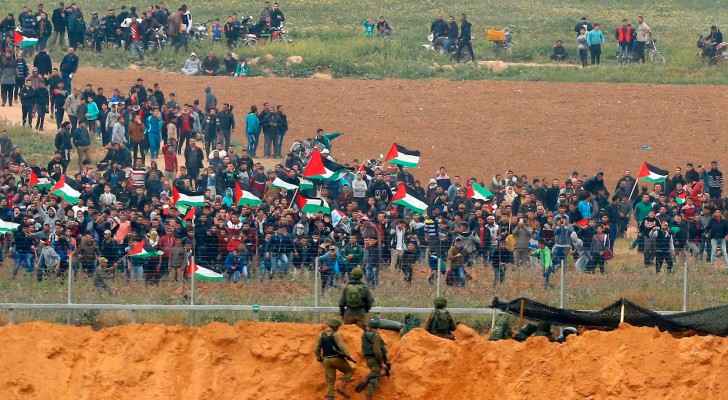 Israel’s use of live ammunition against unarmed Palestinian demonstrators in Gaza on Friday, which killed 17 people and injured more than 1500 others, has triggered condemnation from the international community, as the occupying State continued its violation of the international human rights law.

Several protests took place in Israel in solidarity with Gaza, as dozens of Palestinian residents in Jaffa took to the streets in protest of Israel’s crimes against Gazans. Meanwhile, 250 Israeli citizens protested for the same reason in Tel Aviv on Sunday; the protest was under the slogan “Create hope, stop the next war."

While the United Nations and European Union called for an investigation into Friday’s incident, Israel’s Ministry of Defense said that “from the standpoint of the [Israeli Defence Force] soldiers, they did what had to be done.”

However, Turkish president Recep Tayyip Erdoğan referred to Israel’s Prime Minister, Benjamin Netanyahu, as a “terrorist,” while condemning the deadly attack on the Gaza border.

In Ireland, Gerry Adams, former President of the Sinn Fein party, called upon Ireland to expel its Israeli Ambassador over the killing and wounding of peaceful Palestinian protesters, reported the Irish Belfast Telegraph.

France also called for Palestinians’ right to a peaceful demonstration, while it urged Israel to show restraint, France 24 reported on Sunday.

Palestine had requested on Sunday an urgent meeting with the Arab League at the level of Permanent Representatives to discuss the crimes committed by Israel against Palestinians on Friday, according to Wafa news agency.

The “Great Return March” is scheduled to continue until 15 May, 2018, the day which marks the 70th anniversary of the Nakba, and the day the US is scheduled to move its embassy from Tel Aviv to Jerusalem.