The graffiti sprayed on the walls of the schoolyard. (Video screenshot) 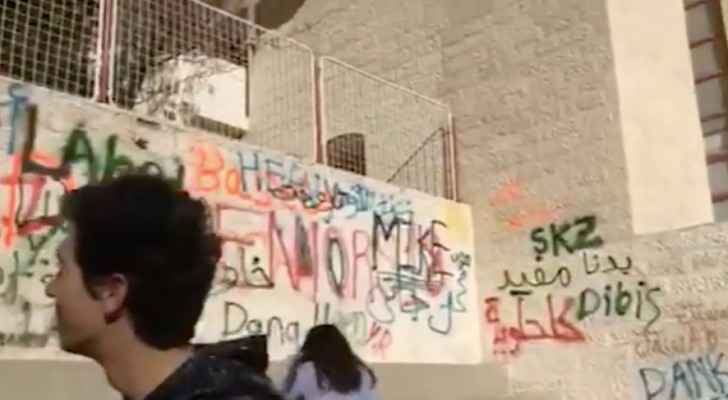 A private school in Amman has decided to cancel its year-twelve graduation ceremony this summer, as punishment for the students who graffitied the walls surrounding its schoolyard.

The students were also issued “final warnings” after spraying random phrases and names all over the walls on Wednesday morning.

A video showing the teenagers chanting and celebrating the graffiti made its way onto social media.

“We did it anyway” was what they were happily chanting and clapping to in the video.

Despite what some have described as “reckless behaviour,” many of the school’s staff and former students came to its defence on Facebook.

One staff member said that they “proudly” work for the school, describing it as “one of the most respectful, elite, well- disciplined schools.”

Another person passionately warned that “no one is allowed to abuse and offense this school’s reputation," adding that "the school has every right to discipline its students for their actions.”

Meanwhile, someone pointed out that “this happens every year in private and state schools.”

Several days ago, the kingdom was shocked by another video of a young student violently beating up his schoolmate at the prestigious International School of Choueifat. The boy was beaten up so badly that he suffered multiple bruises and broken bones in different parts of his body.

The child’s mother said that her son is still being treated in hospital and is even throwing up blood.

In response to the incident, the Ministry of Education formed a commission of inquiry into the video.