Eastern Ghouta has been under attack for the last few days as escalations are on the rise. (TheWhiteHelmets) 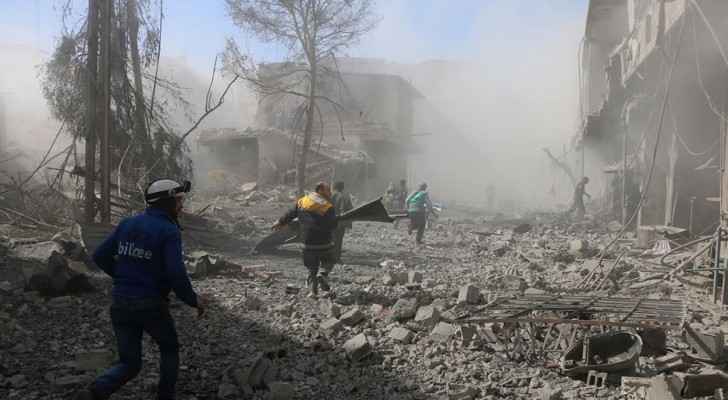 Monday has been one of the deadliest days for the besieged Eastern Ghouta since 2015.

Massive attacks were launched by Assad Regime forces on the opposition-held Eastern Ghouta outside Damascus. There are at least 100 civilian casualties including more than 20 children and at least 450 civilians were injured in the span of 24 hours on Monday and early Tuesday, according to UK-based Syrian Observatory for Human Rights (SOHR).

The SOHR has documented the casualties of a continued aerial and missile shelling in the Eastern Ghouta that targeted more than 13 different areas including Douma city, Beit Sawa town, Jesrin, Hammuriyyeh, Saqba, Kafr Batna, Otaya, Mesraba, Beit Sawa, Hazza and several other areas in the besieged enclave.

Escalations in Eastern Ghouta began on Monday after Assad forces decided to intensify the offensive in an attempt to retake the last remaining opposition-held enclave near the capital Damascus.

The Syrian Civil Defence known as the White Helmets wrote on their Twitter account: “Every single town across besieged Eastern Ghouta has been bombed and is still being bombed now. More than 100 civilians are dead including over 20 children in the last 24 hours. First, they starve the children, then they bomb them.”

The White Helmets shared footage of their teams working to evacuate wounded civilians in Mesraba city.

The United Nations also called for an immediate ceasefire in the area, saying the situation was “spiralling out of control” after an “extreme escalation in hostilities”.