If convicted, Ahed could face a lengthy jail sentence. (Roya) 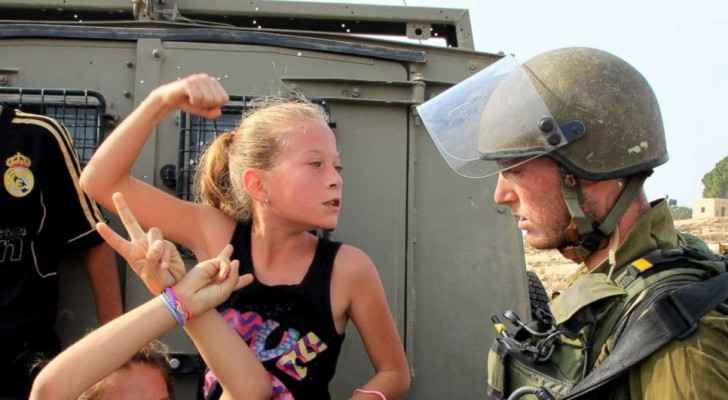 However, after the prosecution read out the indictment, the trial was adjourned until March 11, according to The Independent.

The judge had ordered a closed-door hearing and banned media presence at the Ofer military base, where the trial took place, reported The Guardian.

The 17-year-old activist was arrested after a video of her slapping and shoving an Israeli soldier in the driveway of her family home in Nabi Saleh in the occupied West Bank went viral on 15 December 2017.

Ahed and her mother, Nariman, were taken into police custody in a night-time raid just a few days after the video made international headlines.

Nariman, who filmed and shared the video on Facebook, has been charged with incitement on social media and assault.

Tamimi’s father, Bassem, was not feeling optimistic on Tuesday.

He said that he arrived at the trial “with no good expectations, because this a military court, and it’s part of the Israeli military occupation,” according to The Guardian.

For Palestinians and their supporters, Ahed is a symbol of resistance to Israeli occupation, but many Israelis regard her as an attention-seeking troublemaker.

Ahead of her trial, a group of 27 prominent US writers, athletes, actors and activists signed a petition calling for the release of the detained teen.

Dream Defenders, the civil rights campaigning group behind the petition, released the statement: "In the US, we know all too well what it's like to be oppressed simply because you exist, because you refuse to give up your fight for freedom."

"Too many of our children quickly learn that they may be imprisoned or killed simply for who they are. From Trayvon Martin to Mohammed Abu Khdeir and Khalif Browder to Ahed Tamimi - racism, state violence and mass incarceration have robbed our people of their childhoods and their futures," it added.

Ahed is one of the estimated 300 Palestinian minors being held in Israeli prisons, according to The New Arab.

The IDF said that over the past three years, about 1,400 Palestinian minors have been prosecuted in special juvenile military courts.

Dream Defenders stressed that Israel’s military court lacks basic fair trial protections and has a 99.7% conviction rate, while civil rights groups have criticized the Israeli system of giving no guarantee of a fair trial.

If convicted, Ahed could face a lengthy jail sentence.