Palestinian activists expel US delegation from Bethlehem Chamber of Commerce

An activist shouting in one of the US officials' face after breaking out the meeting. (SocialMedia) 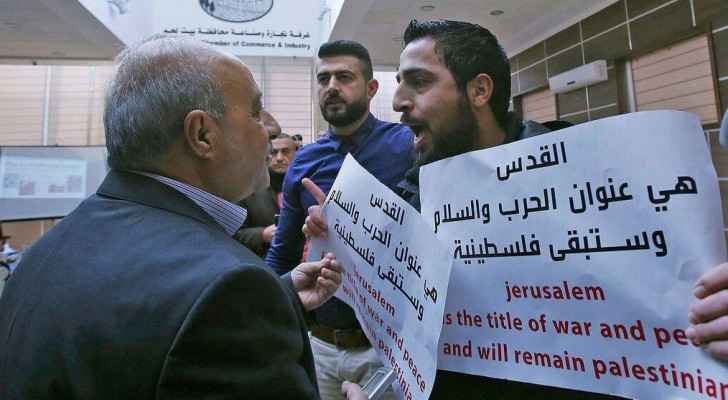 A group of Palestinian activists broke into the Bethlehem Chamber of Commerce and Industry on Tuesday and kicked out the US State Department delegation and closed the office of the Chamber.

Carrying banners that read: ‘Jerusalem is the title of war and peace and will remain Palestinian’, activists broke out the hall, where Palestinian businessmen were meeting with US officials.

They demanded the dismissal of the Bethlehem Chamber of Commerce and Industry’s Chairman, Samir Hazboun, as he did not comply to the national consensus, and did not respect all national decisions to boycott meeting with US delegations, the Palestinian News Network reported.

Activist Ahmed Odeh said: “Today’s action [expelling the delegation] was a message to the arrogant American administration that supports the occupation”.

Bethlehem Chamber of Commerce and Industry welcomed the delegation from the US State Department, which contradicts the national calls to prevent any US officials from visiting Palestinian lands.

This came following US President Donald Trump’s decision to declare Jerusalem as the Israeli capital and to relocate the US Embassy to the holy city.

Commenting on the incident, the Secretary of the Fatah movement in Aida Camp said that this is contrary to the national resolution that called for not receiving any American officials following Trump's Jerusalem decision.

He also said: “Any American who doesn’t stand with Palestinian people is not welcome here.”