US Embassy to open in Jerusalem before the end of 2019: Pence

The Knesset during today's special session with US VP Mike Pence. (Twitter) 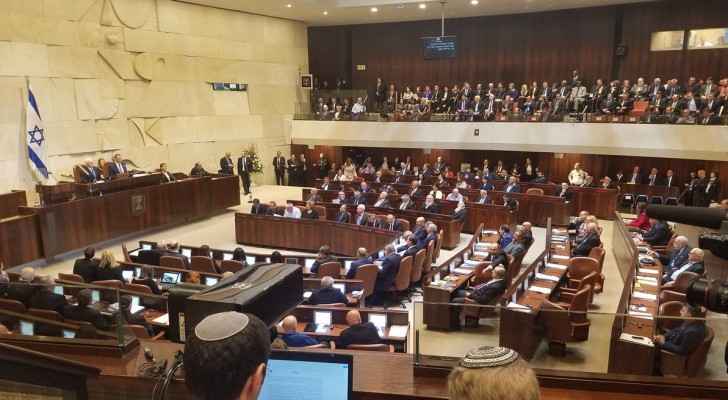 The US Embassy to open its doors in Jerusalem before the end of 2019 officially, the US Vice President, Mike Pence confirmed during his visit to Tel Aviv.

The date will be earlier than expectations, when President Donald Trump made his announcement last month that Jerusalem is the Israeli official capital and the US Embassy will be moved from Tel Aviv to the city.

Pence made his remarks during a special Knesset session, where Netanyahu described Trump’s Jerusalem decision as one of the momentous decisions in Zionism’s history.

However, Pence’s speech was interrupted by Arab MPs who protested against Trump's controversial declaration, as they carried banners say that Jerusalem is the capital of Palestine. However, they were taken out of the Knesset.

On Pence’s first day of his visit to Israel, he confirmed that the US is committed to forging a "lasting peace between Israel and the Palestinians" and called on the Palestinians to return to the negotiating table.

Pence is in Israel, the latest country to visit during his Middle East tour that was kicked off on Saturday in Egypt, where he met the President, Abdel Fattah Sisi, before heading to Jordan, and met King Abdullah II.

During his short visit to Egypt, Pence confirmed to Sisi that the US would support a two-state solution for Israelis and Palestinians if the two sides agreed, seeking to reassure a key Arab ally over Trump’s Jerusalem decision, Reuters reported.

“We heard President Sisi out,” Pence told reporters after their meeting, confirming Sisi described his objection to Trump’s decision as a “disagreement between friends”.

Pence assured to Sisi that his country is committed to preserving the status quo of holy sites in Jerusalem and had come to no final resolution on boundaries for the two parties.

While in Jordan, the King and Queen Rania Abdallah met with the Mike Pence in Amman on Sunday, where Jerusalem’s topic was the main topic on the table.

Meanwhile, Jordanians were protesting his visit on Saturday night outside the US Embassy of Amman.

However, Palestinian leaders refused to meet Pence during his visit, as a senior Fatah official Jibril Rjoub said that Pence was "unwelcomed" in Palestine, following Trump’s Jerusalem decision.