What laws should be amended in 2018 in Jordan?

Activists and Human Rights Lawyers in Jordan are working to change several laws in Jordan. 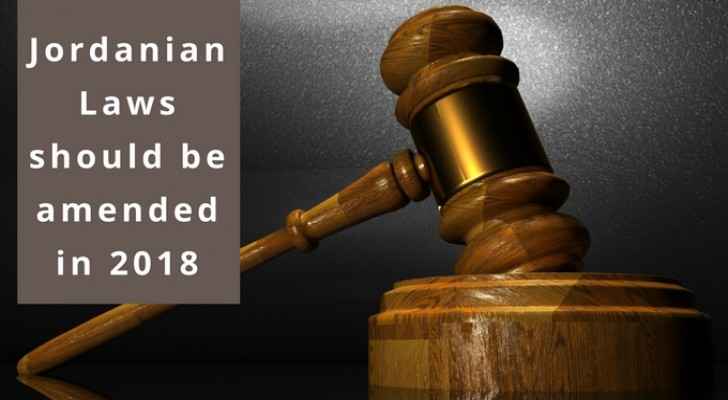 While Jordan is witnessing significant improvement in terms of human rights and laws amendments, it is still hostage to several laws rooted from aged traditions in the society.

The government is in serious need to respond to the popular demands to change or even abolish several laws that underestimate women rights, labors and many others.

However, Jordan abolished Article 308 in August 2017, that pardones rapists if they married their victims from the criminal charge, which means the Kingdom is on its way to witness several changes that will help improving the status of human and women rights during the coming year.

Article 6 in the Personal Status Law does not allow Jordanian mothers to pass their nationality on to their children, so they can guarantee all their rights implemented in the law as Jordanian citizens.

There are many developments regarding this issue, as by mid- September, the Cabinet issued new instructions that will give children of Jordanian women new privilege that will consider them as Jordanians when it comes to education in public universities.

Also, the Civil Status and Passports Department issued an identification card in 2016 for Jordanian women’s children that will provide them with certain privileges.

However, this card was not very helpful for those children in their everyday life activities, since they are not considered as Jordanians in their rights of work, health, joining the army, issuing their driving licenses and several other occasions.

Many Arab countries have already taken the lead in amending the law and allowing women to give their nationalities to their children, including Algeria, Egypt, Morocco, Tunisia, and Yemen. Will Jordan follow their footsteps?

While the number of minor girls- aged under 18 years, is witnessing a significant increase in Jordan recently, it is considered an essential violation of the legitimate human rights.

Minors marriage is a social issue that needs serious official steps to control it, as it is linked to the physical, emotional, sexual, psychological and social growth and the ability to make informed decisions for minors.

The Jordanian Cabinet issued new regulations in July 2017 on Article 36 in the Personal Status Law, to regulate the legal age for early marriage for girls in the kingdom. It included provisions to allow a maximum 15-year-old age difference or less between the husband and the wife, with conditions that the husband is not married and that marriage would not prevent the girl from pursuing her education.

The regulations specified that the newlyweds should both attend a workshop on marriage organised by the Iftaa Department, and they should present a certificate about it.

However, Jordan is still in need for more adjustments to Article 36 to prevent such human rights violation?

Article 183 of the Penal Code prohibits and criminalize labor strikes, and says that workers in “vital sectors” will be imprisoned if they go on strike.

It contradicts the Jordanian Constitution and the international conventions ratified by Jordan and the Jordanian Labor Law which gave workers the right to strike.

Many labors’ unions stressed on the need to improve the standards of living to meet the economic changes that led to the decrease of wages and at least, offer them appropriate working conditions.

The Article 340 of the Jordanian Penal Code allows a reduction in the penalty when a man kills or attacks his wife or any of his female relatives in the alleged act of committing adultery or in an “unlawful bed.”

It clearly contradicts Article 7 which states that Jordanians are to be guaranteed personal freedom.
Human rights activists and lawyers are calling the Cabinet to suspend this law, as it contradicts with women rights as well as human rights and all the Islamic laws.

While the law was reviewed by the parliament several times, it succeeded to pass the Cabinet and the upper house, but it was rejected by the lower house.

Every year, 15 to 20 women and girls in Jordan are burned, beaten, or stabbed to death by family members because they are seen as having transgressed social codes of “honor”, according to Human Rights Watch reports.

The penalty can still be reduced under Article 98 of the penal code where the perpetrator commits the crime in a “state of great fury resulting from an unlawful and dangerous act on the part of the victim.”

Under Article 97, when a court applies the “fit of fury” defense for premeditated murder, the penalty can be as little as one year.

In March 2017, the cabinet adopted reforms by the Royal Committee for Developing the Judiciary and Enhancing the Rule of Law to repeal article 340 of the Penal Code, and prohibit the “fit of fury” defense under article 98 in relation to crimes committed against females to preserve “honor.”

Will Jordan be able to further prohibit reduced penalties in cases related to “honor” killings regardless of whether the victim’s family calls for leniency or not?

Article 292 of the Jordanian Penal Code states: “Any person who has forced sexual intercourse with a female- other than his wife- shall be sentenced to at least five (5) years of temporary hard labour.”

While there is no official statistics or reports about marital rape in Jordan, several draft amendments were suggested, however; it failed.

Human Rights Watch reports called Jordan to provide the penal code a review to define marital rape and make it a crime.

However, women rights activists and lawyers in Jordan are calling for further laws’ amendments, including the calls to issue a law to guarantee Jordanian women an equal work opportunities, income and protect their rights comparing to their male peers.

Another calls to impose penalties on smokers in public places, and to allow all workers the right to form and join trade unions.

Jordan is still considered one of the few countries that do not criminalize homosexuality. However, LGBT people displaying public affection can be prosecuted for "disrupting public morality".

A recent report by Human Rights Watch about: Top 5 Reforms Middle East Governments Can Make in 2018, mentioned Jordan’s progress in abolishing the Article 308 with calls to achieve more.

The report mentioned the need to abolish all laws that allow jailing people for “insulting” governments or any notions of the country’s “reputation,” “national interest,” “culture,” or “religion.”

It mentioned the need to abolish several laws including allowing women to marry from different religion, abolishing remains of the males guardianship system.

Also the report called to abolish laws that allow some countries to consider themselves as massive jails, arbitrarily denying people the right to leave or the right to enter.

Such as Saudi Arabia’s travel bans on many Saudis, and reportedly detained visiting foreign government officials like Lebanon Prime Minister Saad Hariri. Also such as Israel besiege on Gazans, prohibiting them from exiting the strip even for urgent medical treatment or education abroad.