From: Peta, who says the donkey on the left has a tongue sticking out due to a neurological disorder. 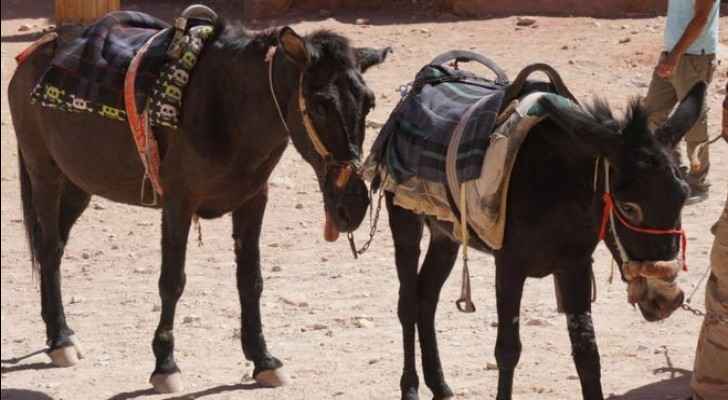 The Jordanian Ministry of Tourism and Antiquities announced it was following latest reports related to the mistreatment of working animals in Petra, Jordan.

The ‘cruelty’ to animals is an issue that Jordan is taking extremely serious, also it is a punishable crime in the law, in Article 472 of the Penal Law, the Ministry confirmed in a statement.

The Ministry also indicated that teachings of Islam urge Muslims to treat animals humanely with kindness.

The statement confirmed the ministry is following up on the reported issues, in order to ensure that all violations are stopped and dealt with.

It also urged the Tourism Police to step up its enforcement and monitoring of all matters related to the mistreatment of working animals.

This comes following reports that donkeys, horses and camels are beaten and forced to carry visitors in extreme heat without shade or water in Petra.

Animals’ rights groups, Peta, launched an international campaign to call to end the mistreatment of working animals in Petra in Jordan.

They call to replace the animals by mechanised transportations for tourists. It is also urged tour operators and hotels to shun the site until the abuses are stopped.

Working donkeys in Petra are forced to carry tourists up 900 steep and eroded steps to the Monastery. Also Horses, mules and camels carry tourists to the city and through it, some pulling carriages and carts, enduring beatings and lack of food and water as they do so.

Earlier during 2017, a video went viral on social media showing many working animals in Petra wounded from chains and ropes tied around them, which led animal rights group to start taking serious steps to stop violations of animals rights in the ancient city of Petra.

On the other hand, Princess Alia Foundation and the international animal charity, Four Paws, confirmed they already improved the conditions for horses, by providing new stables and ensuring their owners have sufficient food, water and shelter, as well as lighter carriages.

ALthough they acknowledged there is more to do, they expressed concerns that a campaign warning off tourists from Petra and depriving the Bedouin community that has long owned the working animals of their livelihood, which could have an even more negative impact on their welfare, the BBC reported.