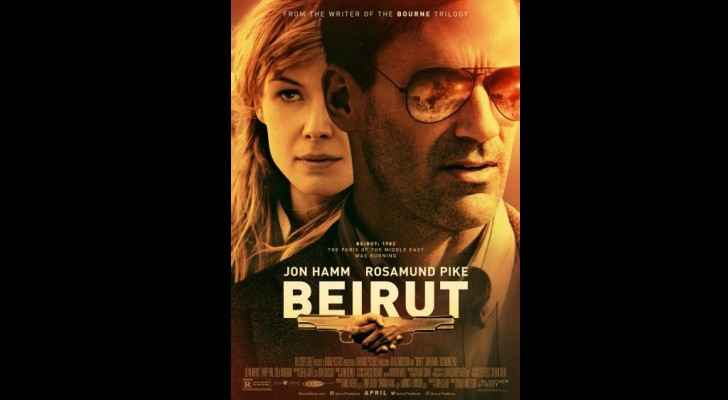 ‘Beirut’ film, the film that only took from Beirut its name, was welcomed by huge criticism from Arabs and Lebanese people for mis-representing historical events during the most important eras in Lebanon’s modern history.

The film that did not feature any Lebanese cast or music, was shot in Morocco, raising many questions over the filmmakers’ real understanding of Beirut and the deep-rooted city’s history that existed for more than 2000 years.

‘Beirut’ film had its first trailer released on January 11th, followed by a wave of criticism starting from the use of the name, the non-Lebanese cast, and featuring the over-used stereotypes about Arabs and Muslims.

It features an Arab destroyed-city with kids running around with guns’ toys, also it presents an Islamic terrorist organization that does not exist in reality, in addition to the most important one which is manipulating real historical events and characters.

Which currently, does not represent real Lebanon and Beirut city, as it became one of the most-civilized cities in the Middle East and the world, in addition to the fact that it is a vital tourist attraction in the region.

The film’s story is set in 1980s, as Jon Hamm’s character, who is a US diplomat finds himself back in Beirut for a CIA mission after a tragic incident at his home during the civil war. Ten years later, he comes back to negotiate for the life of a friend who was arrested by an Islamic terrorist Organization.

Suddenly, the Israelis are starring in the film as the knights who are trying to save Beirut from its own people, while white Americans roll in to save the day once more.

It will be released on April 13th, which happens to be the day when the Lebanese civil war started before 43 years ago, which Lebanese people perceived as a simple marketing opportunity, reducing the real importance for such day in the history.

Lebanese people on social media expressed their anger and demanded Lebanon to ban the film in the country:

So you made a movie about Beirut but shoot it in Morocco, have NO Lebanese cast represented, make US look barbaric and have the white men & Israel look like heroes & releasing this on April 13, the day the Civil War started

The worst thing about this is the title— Beirut. One of the oldest and most culturally signifient cities in the world is reduced to the story of some idiot American CIA guy who got kidnapped. https://t.co/LlexZkfhRN

Even when something isn’t about white people, they find a way to insert themselves in it. The Lebanese civil war was about geopolitical power struggles in Lebanon, with thousands of innocent Palestinian refugees being caught in the middle & slaughtered. Not some fucking CIA agent

There is a duty for Lebanon to ban this movie. It is absolutely necessary. Anything other than a banning of this movie is unacceptable. Once again, the US & allies using propaganda to ruin the image of the resistance & make "israel" look heroic. https://t.co/KWsFGgTQti

this trailer has every decontextualized, ahistoric, and orientalist cliche in the book, complete with Arabs-are-condemned-to-kill-each-other-forever “cycle of violence” tough guy pablum—

Lebanon announces 'state of emergency,' as ....

Lebanon announces 'state of emergency,' as ....