'Palestinians' rights are not for sale': PLO responds to Trump threats 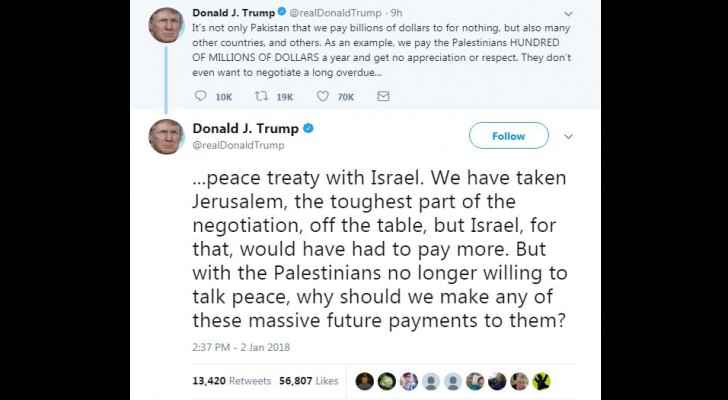 Conflict between US and the Palestinian Authority reached new peak, after Trump tweeted threatening the Palestinians to cut aids unless they will commit to peace talks with US and Israel.

On Twitter, Trump said: "It's not only Pakistan that we pay billions of dollars to for nothing, but also many other countries, and others. As an example, we pay the Palestinians HUNDRED OF MILLIONS OF DOLLARS a year and get no appreciation or respect. They don’t even want to negotiate a long overdue…"

And continued in another tweet: "...peace treaty with Israel. We have taken Jerusalem, the toughest part of the negotiation, off the table, but Israel, for that, would have had to pay more. But with the Palestinians no longer willing to talk peace, why should we make any of these massive future payments to them?"

His tweets followed the US Ambassador to UN, Nikki Haley’s remarks during a media conference that US will cut fund to UNRWA, the UN’s agency for Palestinian refugees, unless Palestinian Authority will return to the negotiations table with Israel and US.

Haley said: “I think the president has basically said that he doesn’t want to give any additional funding until the Palestinians are agreeing to come back to the negotiation table”.

However, the Palestinian Liberation Organization held meeting on Wednesday morning to discuss US threats, and the response was: “Palestinians' rights are not for sale”, according to Wafa News.

Executive Committee member in the PLO, Hanan Ashrawi, also described Trump’s tweet as blackmail, saying: “We will not be blackmailed”.

“President Trump has sabotaged our search for peace, freedom and justice. Now he dares to blame the Palestinians for the consequences of his own irresponsible actions.”

Ashrawi added: “By recognizing Occupied Jerusalem as Israel’s capital Donald Trump has not only violated international law, but he has also single-handedly destroyed the very foundations of peace and condoned Israel’s illegal annexation of the city.”

After Trump’s Jerusalem decision, relations between US and the PLO have been tensed, especially after Abbas announced the end of peace talks, refusing to meet with US officials regarding the peace process.

President Mahmoud Abbas said earlier during a meeting with his French counterpart that he will not accept any peace plan in the Israeli-Palestinian conflict from the US. side, saying that Washington is no longer a “neutral broker “after it recognized of Jerusalem as an Israeli capital.