Jordanian expat offers 7,000 JD reward to anyone who ‘helps clean up’ Jordan

Jordanian expat offers 7,000 JD reward to anyone who ‘helps clean up’ Jordan 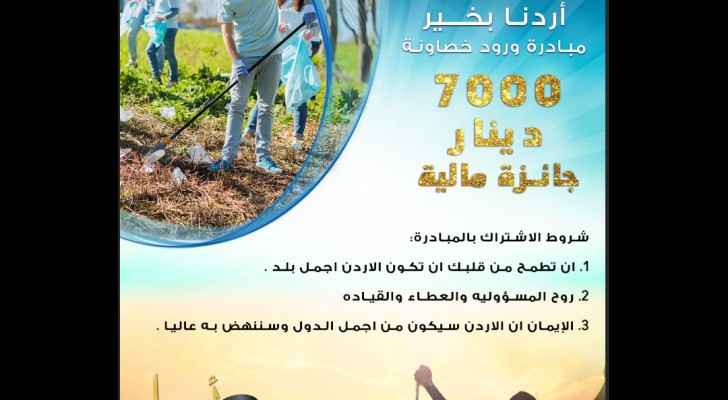 Attention, patriots: If you want to help make Jordan cleaner, a reward of 7,000 JOD could be yours.

The reward is part of an initiative launched by a young Jordanian woman called Woroud Khasawneh.

“I have visited Jordan several times. During my last visit, I was taken by the country’s beauty, but thought to myself: it also needs to be improved; it needs someone to take care of it,” Woroud said, who is currently residing in the UAE.

“Cleanliness is a sign of godliness,” she said. That was the inspiration behind launching the initiative.

Woroud noted that Jordan deserves more efforts from Jordanians in helping clean the country, as that “will reflect positively on them,” she added.

Such behaviour will also “reinforce feelings of loyalty and belonging within them,” Woroud explained.

The initiative aims to strengthen cooperation between Jordanians and to raise awareness to create a greener, healthier Jordan.

Taking part in the initiative is easy.

All you have to do is create a team of at least 20 people, choose the area you would like to revamp, then visit schools, universities and shops to talk about the initiative and explain the importance of it and of keeping the Kingdom clean.

Revamping the area will include painting houses, planting trees, removing trash from the streets and anything else you could think of.

You can register your details by clicking here (link is in Arabic) and someone from the initiative will contact you shortly afterwards.

The team that visits the biggest number of schools, universities, houses and shops and who convinces the largest number of people to clean up their streets and beautify their areas, will win.

The 7,000 JOD reward will be split into three parts:

Hurry up, the deadline is looming: 17th November, and the initiative will last for three weeks.