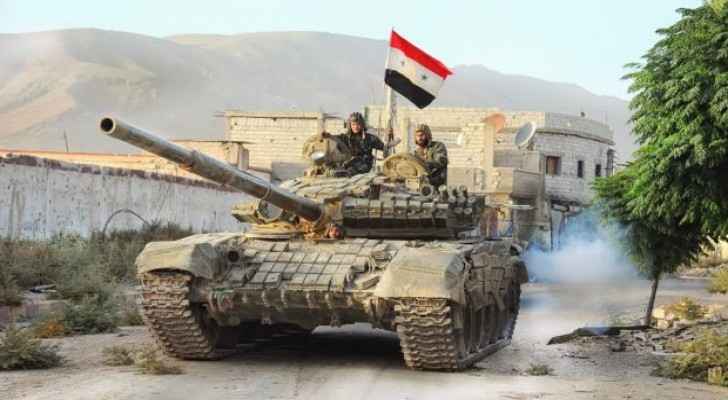 Syrian regime forces renewed their offensive along the Jordan border on Sunday, targeting the Free Syrian Army’s (FSA) remaining positions in the Badiya Al-Sham area, according to Syrian media.

Led by the 5th Corps, the Syrian Arab Army reportedly stormed several points along the Jordanian border, including the 164th Garrison.

On Saturday, Syrian army forces, backed by allied foreign militias, managed to recapture three checkpoints along the border with Jordan, in the eastern countryside of As Suwayda, according to Syrian news agency, Qasioun News.

This reportedly followed violent clashes between the Syrian rebels and the regime forces, amid mutual artillery and rockets shelling.

The advancement comes as the Jordanian government announced that relations with the Syrian regime are heading “in the right direction,” expressing hope that the border between the two countries will be reopened in the near future.

“Our relations with the Syrian state and regime are going in the right direction,” government spokesman Mohammad Momani said on television on Friday night.

He highlighted the “stability” of the situation in southern Syria, across the border from Jordan, noting, "If the current situation continues and southern Syria stabilizes, it would allow for the reopening of the crossing points between the two states."

The government spokesman, who is also state minister for information, added that his remarks were “a very important message that everyone should hear.”

A cease-fire brokered by the United States, Russia and Jordan in the southern Syrian provinces of Daraa, Qunaitra and Swaida has largely held since it entered into force July 9.

“The cease-fire is holding, and we hope there will soon be additional measures to consolidate stability and security in Syria,” Momani said.

“If the current situation continues and southern Syria stabilizes, it would allow for the reopening of the crossing points between the two states,” he added.

Jordan is one of the few Arab countries not to have closed its embassy in Damascus, and the Syrian diplomatic mission in Amman also remains open.