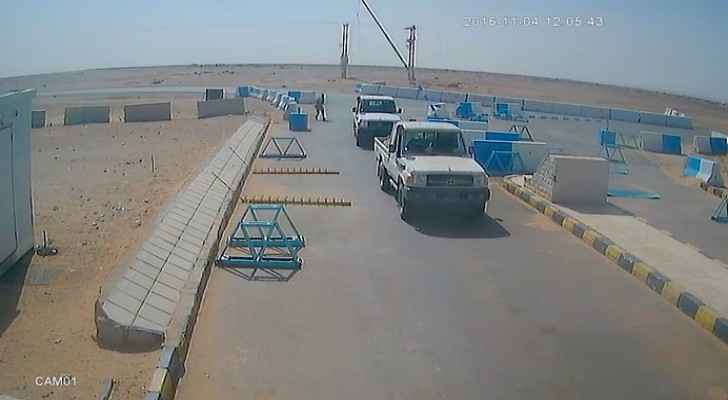 The only surviving US soldier to survive the fatal shootout that took place outside the King Faisal Airbase in Jafer, Jordan, has spoken exclusively for the first time about the incident,

Jordanian First Sgt. Ma’arik al-Tawayha was sentenced to life in prison for the 2016 murder of the American soldiers, which left the Jordanian community on the fence about what really took place that day.

On Monday the Jordanian military and FBI released the video of the incident, following pressure by Tawayha’s tribe and the Jordanian community.

The surveillance video added more confusion to many of those who watched it, but the staff sergeant, who asked to remain anonymous, helped piece together what happened that day.

It was a scorching hot November day, and as the American soldiers’ convoy approached the camp’s entry gate, gunshots soon erupted from a guard post without being provoked by the US soldiers.

“We kept yelling in English and Arabic, saying we were friends. And he kept shooting,” said the American soldier.

Al-Tawayha’s motive was unclear at that point.

During his trial, the Jordanian soldier told a military court that he was following camp protocols because he believed that they were under attack.

“We were just terrified and confused,” the staff sergeant said. “We didn’t know what was happening, or why, or how many guys were going to come after us.”

The staff sergeant said that Tawayha had “probably seen Special Forces pass through the gate twice a day.”

In the video, Tawayha shot the second of the four trucks at close range at least 30 times, killing Sergeant Lewellen and Sergeant McEnroe.

The first two trucks were off camera, but smoke could be seen rising from that end, indicating gunshots.

“Glass was flying, I saw the guys slumped over,” the staff sergeant said. “I waited a few seconds, hoping the guys in front could push through, but nothing happened.”

The staff sergeant then fired three shots toward the gate with a 9-mm pistol, before seeking cover with Sergeant Moriarty, who was hiding in the truck behind him.

While the surveillance video had no sound, the staff sergeant said that both sides were screaming through the loud gunfire. He said that Tawayha was telling them to “put their hands up,” while the Americans were shouting back that they were friends.

The Americans could then be seen popping up their heads from behind the barricade and raising their arms without guns to indicate a cease-fire. However, Tawayha continued to fire bullets at them.

“I put my gun down, raised my hands a little and he took a shot at me,” the staff sergeant said. “That is when we decided this probably was not an accident.”

At that point, the staff sergeant and Sergeant Moriarty were stuck. They had to quickly discuss their options.

“We were trying to wave and we’re getting shot at,” the staff sergeant said. “I gave up with trying to figure stuff out and told him we should just try to kill this guy.”

Four minutes into the clash, the men took cover behind other concrete barriers farther from the gate.

“We thought it would buy us some time,” the staff sergeant said. “Maybe help would come.”

However, Tawayha ran towards the soldiers with his rifle leveled and hid behind the first truck, while still firing at them.

Tawayha, after moving on to the second truck, rushed towards the Americans, who fired their pistols at point blank range at him, yet he managed to shoot Sergeant Moriarty dead.

That’s when the staff sergeant walked around the barrier and shot Tawayha, who could be seen falling to the ground behind the barricade.

The surviving sergeant said that he then grabbed Tawayha’s rifle and threw it away from him, before raising his hands as he backed off into the desert.

“It is not right, but our government is looking for cash and they’ll do anything to get it,” his brother, Abdul-Rahman Abu Tayeh, said in an interview.

“We lived for years and years with the Americans, so why would we want a problem with them now?” said Lafi Abu Tayeh, another relative of Sergeant Tawayha’s who helps coordinate the protests. “But since the ruling, they are not welcome here.”

The staff sergeant too is still perplexed by Tawayha’s motive.

“There is no rational person who chases two attackers from the safety of the guard shack without backup,” he said. “It just still doesn’t make sense.”