"Eventually enough bricks will be gone and it will fall." 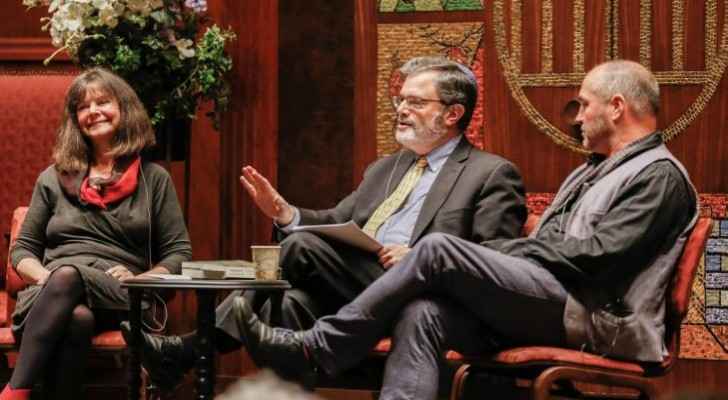 A group of award-winning authors on Sunday launched a book highlighting Israel's 50-year occupation of the Palestinian territories, raising money for an NGO hated by the Israeli government.

Chabon, winner of the 2001 Pulitzer Prize for his novel "The Amazing Adventures of Kavalier & Clay", said the aim was to start a conversation about the impact of the occupation on both Israelis and Palestinians.

By using famous authors, including the winners of three Pulitzers and a Nobel, they were aiming to "sort of trick" people "into paying attention to the occupation by baiting the trap, in a way, with the work of a really amazing writer".

Proceeds from the book will go to Breaking the Silence, an NGO that documents alleged abuses by Israeli forces in the occupied Palestinian territories and publishes testimonies of soldiers, much to the chagrin of Israeli officials.

In 2016 the then defence minister accused the NGO of treason and the current government -- the most right-wing in Israel's history -- has sought to curtail their work and ban them from speaking in schools.

The book, which is published in English, French, Arabic, Hebrew, Spanish and Italian, takes the form of individual chapters by the authors, most of which centre around their trips to Israel and the occupied Palestinian territories in the past two years.

Chabon's chapter touches heavily on the "arbitrary" nature of the occupation in the West Bank, with Palestinians often caught up in bureaucracy and subject to the whims of individual soldiers and commanders.

The purpose, he said, was "proving to the people you are conquering that they have absolutely no control over their fate or their destiny".

Author Dave Eggers, who visited Gaza in his chapter, details life in the Palestinian enclave and how residents try to survive in the territory often labelled the world's largest prison.

Two million Palestinians live in the Gaza Strip, coralled by a decade-long Israeli blockade, with Egypt also sealing its border.

Israel says the occupation is necessary to protect its citizens, with Palestinians often carrying out attacks against Israelis in the West Bank and elsewhere.

Eggers details peoples' frustrations with their lives, including with the Islamists Hamas who run the strip and restrict cultural freedoms.

Waldman, who was born in Jerusalem and holds Israeli citizenship, said she had to try to tackle the occupation because it was done in her name as a Jew.

"The occupation is an edifice and those of us who care have to do what we can to chip away at it. This book -- this is our brick that we are pulling out of the edifice of the occupation.

"Eventually enough bricks will be gone and it will fall."

Israel values its relationship with the diaspora highly, highlighting itself as the home for all Jews from across the globe.

Both Waldman and Chabon said there was a growing gap between young American progressive Jews and Israel.

Seventy-one percent of US Jews voted for Hillary Clinton in the 2016 presidential election compared with just 24 percent for Donald Trump -- despite the latter promising to be the most pro-Israel president ever.

"Jews of my parents' generation, even of my generation, had a much easier time being progressive on all issues except Israel," said Waldman.

"Jews of my children's generation, Jews in their 40s, 30s, 20s, those Jews are not willing to make an exception for Israel in their world view.

"They are not willing to engage in the same kind of hypocrisy that my generation and generations before us have."

Has 'The Eyes of Darkness' book predicted coronavirus more ....