Tensions around the At-Tanaf garrison have surged as pro-regime troops look to expand their influence. 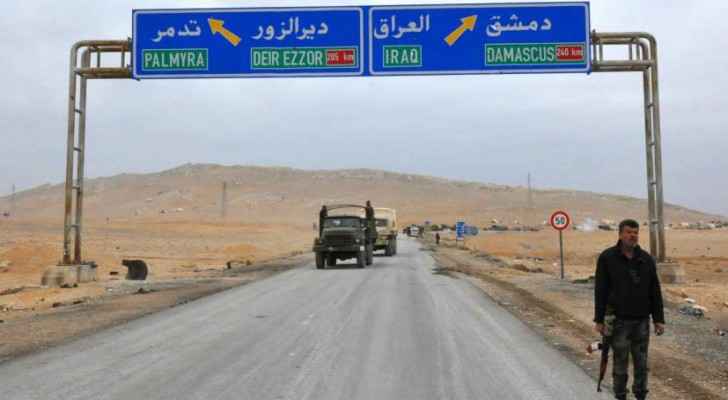 Syria said its troops and allied forces reached the Iraqi border on Friday, for the first time since 2015, a day after a US jet shot down a pro-regime combat drone.

State news agency SANA, citing a military source, said "army units in cooperation with allies managed to arrive at the border... with Iraq" and "set up positions in an area northeast of At-Tanaf".

Forces from the US-led coalition fighting the Islamic State group (IS) in Syria and Iraq are using a garrison in At-Tanaf to stage attacks against the jihadists and train Syrian rebels to fight them.

The SANA report said the advance came after "the last" IS fighters in the area "were eliminated".

The Britain-based Syrian Observatory for Human Rights earlier said dozens of pro-regime forces had arrived at the point on the Syria-Iraq border around 70 kilometres (40 miles) north of At-Tanaf.

Asked about the advance, the coalition expressed concern.

"The demonstrated hostile intent and actions of pro-regime forces near coalition and partner forces in southern Syria... continue to concern us and the coalition will take appropriate measures to protect our forces," it said in a statement.

"As long as pro-regime forces are oriented toward coalition and partnered forces the potential for conflict is escalated," it added.

On Thursday a US jet shot down a pro-regime combat drone that fired what turned out to be a dud bomb at US-led coalition forces close to the coalition's At-Tanaf garrison near the Jordanian border.

Tensions around the At-Tanaf garrison have surged as pro-regime troops look to expand their influence.

The US has in recent weeks conducted three strikes against pro-regime forces it deemed to be threatening At-Tanaf.

Earlier in the week, coalition forces "destroyed" a pro-regime unit that was moving into the area, and on May 18, coalition planes struck a convoy that had apparently been heading towards At-Tanaf.

The Pentagon credited Syria regime ally Russia with helping to calm tensions after the drone incident.

"Russia has been very helpful and I think that the calm we see today is largely due to their efforts," spokesman Navy Captain Jeff Davis said Friday.

"They are trying to get the other parties, the pro-regime, the Iranian-backed militias to do the right thing and to prevent them from taking actions that are destabilising."

The Russians "have helped to pass messages and calm the situation there, and we hope that continues", he said.

The Pentagon has not said who was operating the drone, but the At-Tanaf area has seen a surge in activity by Iran-backed troops loyal to Syrian President Bashar al-Assad.

Iran makes an armed drone similar to the one shot down.

The coalition has established a "de-confliction" zone extending 55 kilometres (34 miles) from the garrison, in which pro-regime and Russian forces are not supposed to operate.

Syria's government has been eager to reach the eastern border after recapturing territory in central Homs province once held by IS.

Damascus is hoping to lead the battle against the jihadists in the eastern province of Deir Ezzor and head off any attempts by the US-led coalition to do so.

Syria's government has not held positions on the border with Iraq since 2015, when IS swept down from neighbouring Deir Ezzor and captured positions in Homs province, including the ancient city of Palmyra.