Israel settlers can feel secure that they won't be uprooted from their homes: Netanyahu

Netanyahu says that his government is building in every part of Judea and Samaria. 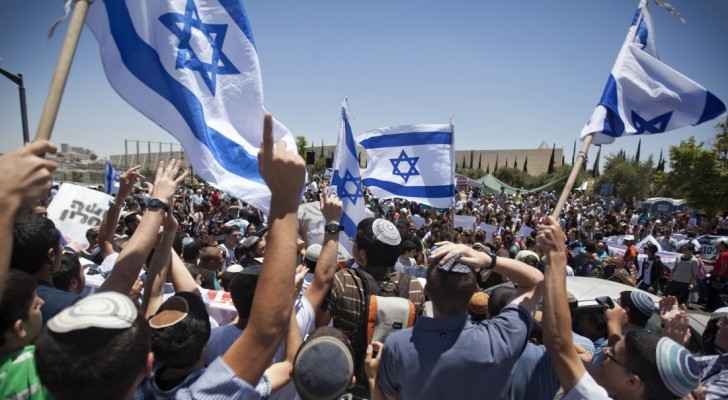 Prime Minister Benjamin Netanyahu on Tuesday told Israeli settlers marking 50 years since the Six-Day War he would keep building across the occupied West Bank and that no one would be "uprooted from his home".

It was unclear if Netanyahu was suggesting no settlements would be dismantled in any peace deal with the Palestinians, which would mark a significant change and raise further doubts over future possibilities of a two-state solution.

A spokesman for Netanyahu did not respond to a request for further explanation.

Netanyahu was speaking in parliament at a special session marking 50 years since the Six-Day War, when Israel's occupation of the West Bank began, to an audience of lawmakers and invited settler leaders.

"Everyone has the right to live in his home and nobody will be uprooted from his home," Netanyahu said.

His comments came as Israeli authorities also advanced plans for some 1,500 settlement homes in the West Bank, including units for the first new official settlement in some 25 years, the Peace Now NGO said.

A defence ministry committee advanced the plans and may do so for around 1,000 more on Wednesday, said the NGO that tracks settlement building in the Palestinian territory.

US President Donald Trump has called on Netanyahu to hold back on settlement building as he seeks ways to relaunch peace efforts with the Palestinians, but the Israeli leader also faces political pressure from the powerful settler movement.

The settlers, pillars of support for Netanyahu's right-wing government, are still smarting over the February demolition of the Amona rogue settlement outpost in the West Bank.

Settler leaders this week accused Netanyahu of a de facto construction freeze after reports emerged of moves to advance plans for some 2,500 settler homes instead of a far larger number they were expecting.

Netanyahu spoke Tuesday of a plan to rehouse Amona evacuees at a new site in the West Bank, which Peace Now says would be the first new government-approved settlement in about 25 years.

Construction in recent years has involved expanding existing settlements in the West Bank, with many countries warning it is gradually eating away at any chance of a two-state solution with the Palestinians.

The fledgling Amichai settlement received an initial green light for 102 dwellings from a defence ministry planning committee on Tuesday, Peace Now said, part of a plans for 1,500 settler homes that were moved forward.

The plans advanced on Tuesday are at various stages in the process and the units are located in different areas.

Plans for the 102 units for the new settlement are in the early stages and require a series of further steps.

Some were existing homes legalised retroactively.

"I have the privilege, after decades, to be the prime minister to build a new community in Judea and Samaria," Netanyahu told the Knesset, or parliament, using the term Israel applies to the West Bank.

"We are building in every part of Judea and Samaria."

Israeli settlement building is seen as illegal under international law and a major stumbling block to peace efforts as they are constructed on land the Palestinians see as part of their future state.

Trump visited Israel and the Palestinian territories last month to seek ways to restart peace efforts, at a standstill since a US-led initiative collapsed in April 2014.