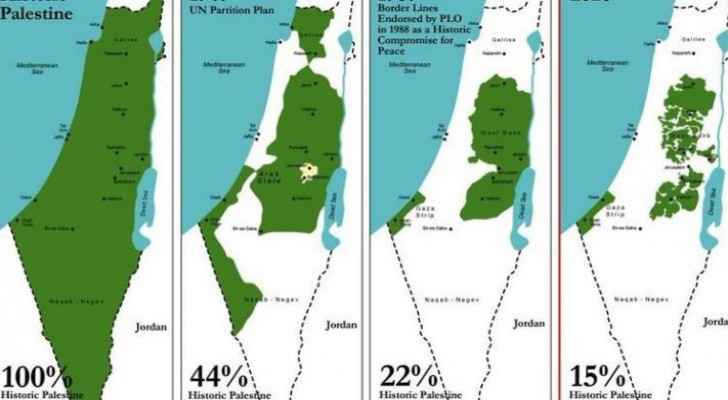 After three years of planning, the US President, Donald Trump revealed his peace plan the "Deal of the Century" during a special press conference together with Prime Minister Benjamin Netanyahu on Tuesday, January 28.

Borders: Trump’s plan features a map of what Israel’s new borders will be, should it enact the plan fully. Israel will retain 20% of the West Bank and will lose a small amount of land in the Negev near the Gaza-Egypt border. The Palestinians will have a pathway to a state in the vast majority of territory in the West Bank, while Israel will maintain control of all borders. This is the first time a US president has provided a detailed map of this kind.

Jerusalem: The Palestinians will have a capital in East Jerusalem based on northern and eastern neighborhoods that are outside the Israeli security barrier – Kafr Akab, Abu Dis and half of Shuafat. Otherwise, Trump said Jerusalem will remain undivided as Israel’s capital.

Security: Israel will be in control of security from the Jordan River to the Mediterranean Sea. The IDF will not have to leave the West Bank. No change to Israel’s approach to Judea and Samaria would be needed.

Palestinian state: The plan does not include immediate recognition of a Palestinian state; rather, it expects a willingness on Israel’s part to create a pathway toward Palestinian statehood based on specific territory, which is about 70% of Judea and Samaria, including areas A and B and parts of Area C. The state will only come into existence in four years if the Palestinians accept the plan, if the Palestinian Authority stops paying terrorists and inciting terrorism and if Hamas and Islamic Jihad put down their weapons. In addition, the American plan calls on the Palestinians to give up corruption, respect human rights, freedom of religion and a free press, so that they don’t have a failed state. If those conditions are met, the US will recognize a Palestinian state and implement a massive economic plan to assist it.

Refugees: A limited number of Palestinian refugees and their descendants will be allowed into the Palestinian state. None will enter Israel.

Triangle: The plan leaves open the possibility that Israel will swap the area known as the "Triangle" – consisting of Kafr Kara, Arara, Baka al-Gharbiya, Umm el-Fahm and more – into the future Palestinian state. According to the plan, "the Vision contemplates the possibility, subject to the agreement of the parties, that the borders of Israel will be redrawn such that the Triangle Communities become part of the State of Palestine."