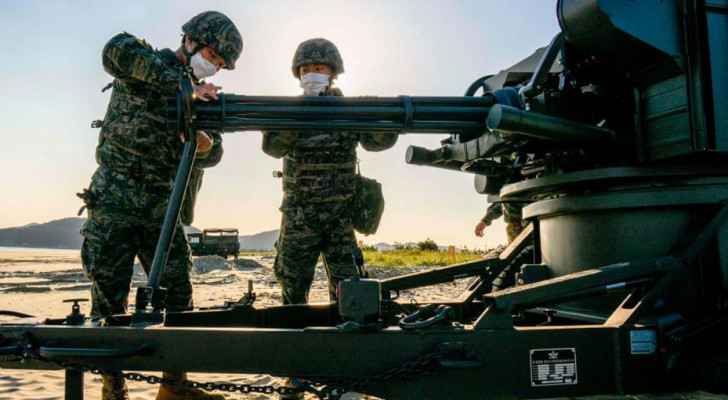 It is South Korea's westernmost territory, soldiers outnumber residents, and you can see North Korea from almost every barbed wire-lined beach: welcome to Baekryeong Island, a community on the front line.

Far closer to the North Korean mainland than it is to the South, Baekryeong is a fortress: tanks are parked at the sides of roads, there are guard posts on every hill, and the picturesque beaches are covered in dragon's teeth -- concrete pyramid-shaped fortifications -- to deter invasion.

Seoul was awarded control over the approximately 45-square-kilometer (17-square-mile) island at the end of Korean War hostilities in the 1950s, but its 5,000 or so residents -- plus an even higher number of soldiers -- live under constant low-level threat.

The island has long been a potential military flashpoint: North Korea's Kim claimed in 2013 that he could "rain down a sea of fire" on Baekryeong, and then staged amphibious mock invasion drills in 2017.

"Sometimes I have dreams about the North Koreans invading, especially with what is happening in the news," said 64-year-old Baekryeong native Kim Keum-sook, referring to the record-breaking blitz of missile launches by Kim this year.

The island is of immense strategic importance for Seoul, as it helps determine control over vital Yellow Sea shipping lanes, without which its Incheon harbor would be cut off from the world.

"I'm still afraid," she said, although her husband, Choi Won-mo, 65, also an island native, said that they were "as well defended as can be."

The flashpoint maritime border has seen intermittent skirmishes, including an exchange of warning shots in the waters around Baekryeong in October after a North Korean vessel crossed the Northern Limit Line.

Choi said such events were a "common occurrence" but after 70 years in limbo people have learnt to live with constant tension -- the Korean War ended with an armistice, leaving the two sides technically still at war.

The worst such incident came in March 2010 just one kilometer off the island when a South Korean warship was sunk by what Seoul said was a North Korean torpedo, killing the 46 seamen on board.

"Just look at all the troops and weapons here, the government is committed to defending Baekryeong island at all costs," said Lee Chung-dong, a 71-year-old fisherman who lived there for half a century.

"It's because they know that if Baekryeong falls, so will Incheon."

Despite the dangers -- the ferry to the island takes a roundabout route to make it less vulnerable to North Korean attack -- Baekryeong is a niche tourist destination.

Hundreds of mostly domestic tourists visit each week, drawn by both the proximity to the North, and also the natural beauty of the location.

One of its most jarring attractions is a cliff formation known as Dumujin, described in the writings of one Joseon Dynasty scholar as "the last masterpiece of an old god."

Another is Sagot beach with its hard quartz-sand floor making it a natural airstrip, a purpose it fulfilled during the Korean War.

"Baekryeong's beauty lies in its natural landscape," said Kim Yong-sung, 50, who was visiting with some co-workers.

"I do sense some danger being so close to the border, but since this has always been the case, it's not going to stop me from enjoying the beauty here."

The island's ancient geological features hold a lesson for those worried about its frontline position, said Kim Chang-hee, 75, a park guide.

"This island is over 10 million years old –- older than the dinosaurs," she said. "Korea has only been divided for 70 years. One day, this too will be a distant memory."

Two injured in run-over incident in ....