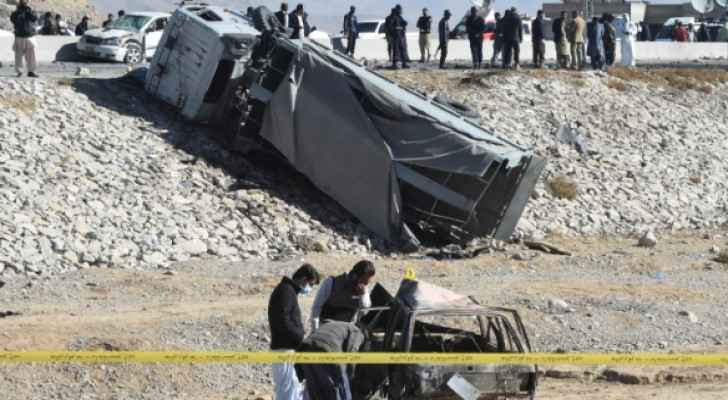 Three people were killed and 23 injured Wednesday when a suicide bomber targeted a police truck in western Pakistan, an attack claimed by the domestic chapter of the Taliban.

Tehreek–e-Taliban Pakistan (TTP), separate from the Afghan Taliban but sharing a common hardline ideology, earlier this week called off a shaky months-long ceasefire agreed with Islamabad and ordered its fighters to resume attacks across the nation.

Senior police official Azhar Mehesar told AFP that Wednesday's blast targeted a security force preparing to escort polio vaccinators in the city of Quetta, and those killed "include a policeman, a woman and a child".

In a statement, the TTP said a "holy warrior" detonated a car bomb near a customs post to avenge the killing of founding member Umar Khalid Khurasani during the truce.

"Our revenge operations will continue," the statement added.

The TTP was founded in 2007 by Pakistani jihadists who fought alongside the Taliban in Afghanistan in the 1990s before opposing Islamabad's support for the US-led intervention there after 9/11.

For a time they held vast tracts of Pakistan's rugged tribal belt, imposing a radical interpretation of Islamic law and patrolling territory just 140 kilometers (85 miles) from the Pakistan capital.

The Pakistani military came down hard after 2014 when TTP militants raided a school for children of army personnel and killed nearly 150 people, most of them pupils.

Its fighters were largely routed into neighboring Afghanistan, but Islamabad claims the Taliban in Kabul are now giving the TTP a foothold to stage assaults across the border.

In the year since the Taliban returned to power in Afghanistan, Pakistan has seen a 50 percent surge in militant attacks, according to the Pak Institute for Peace Studies (PIPS).

Most of these attacks have been focused in the western provinces of Khyber Pakhtunkhwa and Balochistan, which neighbor Afghanistan.

The 2014 school assault deeply shocked Pakistan, and since then the TTP have vowed only to target state security forces.

Afghanistan and Pakistan are the only nations in the world where polio is endemic.

There is resistance to vaccine campaigns in rural areas and among conservative communities who falsely believe they are an effort to sterilize them.

Polio vaccination teams are routinely escorted by police in the western regions, and the TTP has regularly ambushed officers in remote restive areas.

In April, Pakistan reported its first case of polio in 15 months. Since then 20 cases have been reported, according to the government-funded End Polio Pakistan program.

Afghan educator who quit over women ban vows to fight