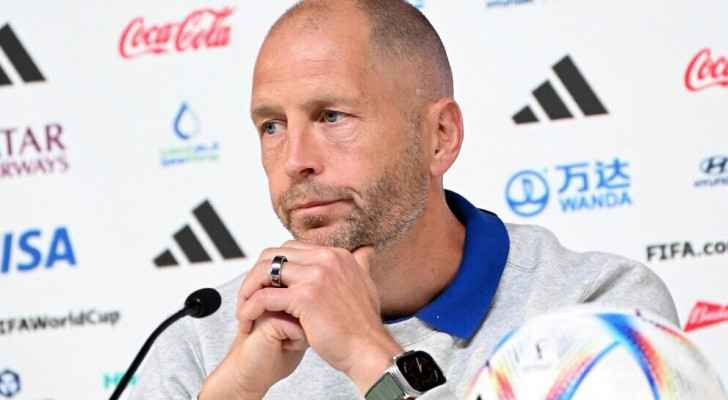 United States coach Gregg Berhalter apologized on Monday for the furore triggered by a social media post depicting Iran's flag without the word Allah as the two geopolitical foes prepared for their crunch World Cup showdown.

US Soccer sparked uproar over the weekend after posting an Iranian flag without its Islamic Republic emblem on the federation's social media feeds in what it claimed was a gesture of solidarity with Iranian women protesters.

Berhalter told a press conference on Monday that the US players and coaching staff had been oblivious about the posts as he sought to calm tensions surrounding Tuesday's Group B game, where a place in the last 16 is at stake.

"Sometimes things are out of our control," Berhalter said. "We're not focused on those outside things and all we can do is apologize on behalf of the players and the staff, but it's not something that we were a part of.

"We had no idea what US Soccer put out. The staff, the players, we had no idea. For us our focus is on this match and I don't want to sound aloof, or we're not caring by saying that.

Earlier, Iran state media called for the United States to be kicked out of the World Cup after the USA men's national soccer team (USMNT) deleted the emblem of the Islamic Republic in a post displaying upcoming matches in Group B for the World Cup.

The USMNT defended the move by telling CNN that it was to show “support for the women in Iran fighting for basic human rights” but was never meant to last over 24 hours.

The change “was a one-time graphic,” the soccer federation told CNN. “We have the main flag on our website and other places.”

However, Iran state media said on Twitter that “by posting a distorted image of the flag of the Islamic Republic of #Iran on its official account, the #US football team breached the @FIFAcom charter, for which a 10-game suspension is the appropriate penalty.”

FIFA, for its part, issued no response.