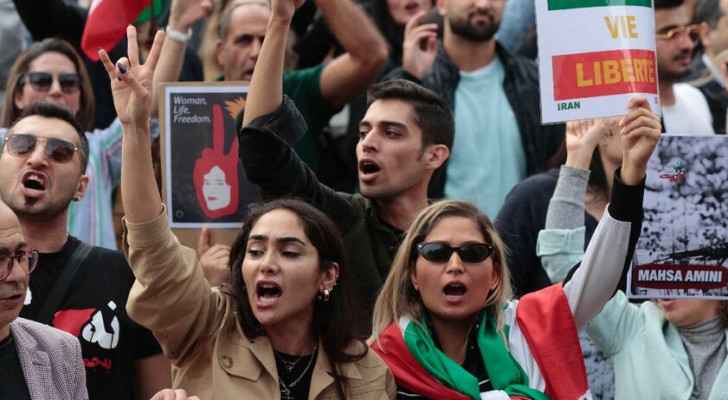 Students led the way Saturday in protests across Iran over Mahsa Amini's death, even as the commander of the powerful Revolutionary Guards told them: "Do not come to the streets."

Security forces had targeted a hospital and a student dormitory overnight, a rights group said, as the protest movement that flared over the 22-year-old's death entered a seventh week.

Amini died in custody on September 16 after her arrest in Tehran for an alleged breach of Iran's strict dress rules for women based on Islamic sharia law.

Security forces have struggled to contain the protests, which started with women taking to the streets and burning their hijab headscarves and have evolved into a broader campaign to end the Islamic republic founded in 1979.

Students protested on Saturday, the start of the working week in Iran, at campuses in Tehran, Kerman in the country's south, and the western city of Kermanshah, among others, online videos showed.

"Shameless, shameless," students shouted as they clashed with security personnel at a university in Ahvaz, southwest Iran, in footage published by the 1500 tasvir social media channel.

The students turned out even as Major General Hossein Salami, head of the Islamic Revolutionary Guard Corps, told demonstrators: "Do not come to the streets! Today is the last day of the riots."

Salami was addressing mourners who gathered in Shiraz to bury worshippers killed Wednesday in a mass shooting at a shrine in the southern city.

The Shah Cheragh mausoleum massacre came on the same day that thousands paid tribute to Amini across Iran, 40 days after her death in police custody.

Ultraconservative President Ebrahim Raisi appeared Thursday to link the shrine attack, one of the country's deadliest in years, to what his government calls "riots" sparked by Amini's death.

Commemorations were also held Saturday for protesters killed in what rights group Amnesty International has labeled an "unrelenting brutal crackdown".

"Death to the dictator," mourners chanted at a ceremony to mark 40 days since the slaying of a protester in the western city of Divandarreh, using a slogan aimed at supreme leader Ayatollah Ali Khamenei.

Rights groups say riot police shot Mohsen Mohammadi, 28, during demonstrations in Divandarreh on September 19, and he died the next day at Kausar hospital in Sanandaj.

Dozens of people who had gathered outside the same hospital late Friday to protect another wounded protester came under fire, the Hengaw rights group said.

"People who had gathered in front of the Kausar Sanandaj hospital to defend Ashkan Mrwati were shot at by repressive forces," said the Norway-based organization.

"These forces want to capture Ashkan Mrwati while he is injured," it said, before tweeting an image it said was of him lying on a gurney and responding to a medic.

Soon after, Hengaw said, the same security forces also "fired at the nearby student dorm" of the Kurdistan University of Medical Sciences.

In online footage verified by AFP, security forces are seen arriving on motorbikes before shooting up into the dormitory building.

In other verified footage, security forces are seen firing tear gas late Friday into a residential block in the Tehran neighborhood of Chitgar where a massive protest was held the night before.

Female students chanting on a street in Kermanshah on Saturday came under fire from the security forces, wounding some of them, including two critically, Hengaw said.

The demonstrations have continued despite a crackdown that IHR said Friday had killed at least 160 protesters, including more than two dozen children.

At least another 93 people were killed during separate protests that erupted on September 30 in the southeastern city of Zahedan over the reported rape of a teenage girl by a police commander, says the rights group.

Worshippers in Zahedan came under automatic gunfire on Friday as they emerged from weekly prayers, said the US-based Human Rights Activists News Agency.

At least 20 security personnel have been killed in the Amini protests, and at least another eight in Zahedan, according to an AFP tally based on official reports.

The trial of five people charged over the protests for offences that can carry the death penalty opened on Saturday in Tehran, according to the judiciary's news website.

One is accused of "attacking police with a car", killing an officer and injuring five others, Mizan Online said.

Tehran has sought to portray the protest movement as a plot hatched by its arch-enemy the United States.