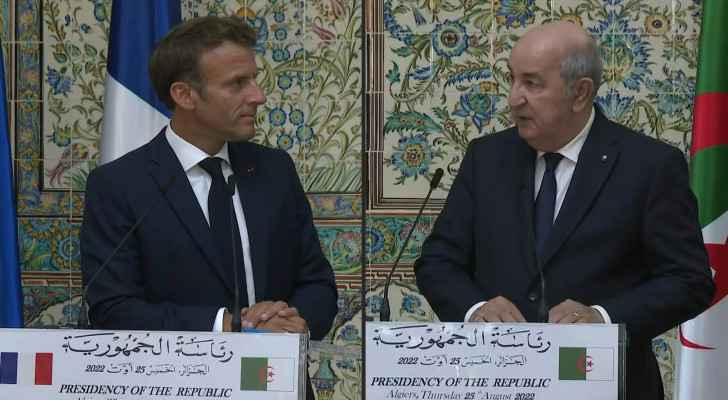 French President Emmanuel Macron announced a "new page" in ties with Algeria on Thursday, the first day of a three-day visit aimed at mending ties with the former French colony months after it marked 60 years of independence.

Macron's office said his visit aims to "lay a foundation to rebuild and develop" a sometimes difficult relationship with the North African nation after a particularly tense few months.

"We didn't choose the past, we inherited it," he said at a joint press conference on Thursday evening alongside Algerian President Abdelmadjid Tebboune.

"We must look at it and recognise it, but we have a responsibility to build our future for ourselves and our youth," said Macron, the first French president to be born since Algerian independence in 1962.

Tebboune hailed the "positive dynamic" in the countries' ties, saying there were "promising prospects for improving the special partnership that binds us".

Macron had landed earlier at Algiers' main airport where he was warmly greeted by Tebboune and a military band that played both national anthems.

Later, the French leader visited a monument to martyrs of Algeria's war for independence, laying a wreath at the site and observing a minute of silence.

The French president announced Thursday evening that the two countries would set up a joint French-Algerian commission of historians to study archives on France's 130 years of colonial rule in Algeria, including the devastating eight-year independence war.

"We have a common (but) complex and painful past," said Macron, adding that the researchers would have full access to the archives.

Ties between Paris and Algiers have seen repeated crises over the years.
They had been particularly stormy since last year when Macron questioned Algeria's existence as a nation before the French occupation and accused the government of fomenting "hatred towards France".

Tebboune withdrew his country's ambassador in response and banned French military aircraft from its airspace.

But Macron's office said he "regretted" the misunderstandings caused by his comments, and his aides believe both sides have moved on, noting the resumption of normal diplomatic relations and overflights to French army bases in sub-Saharan Africa.