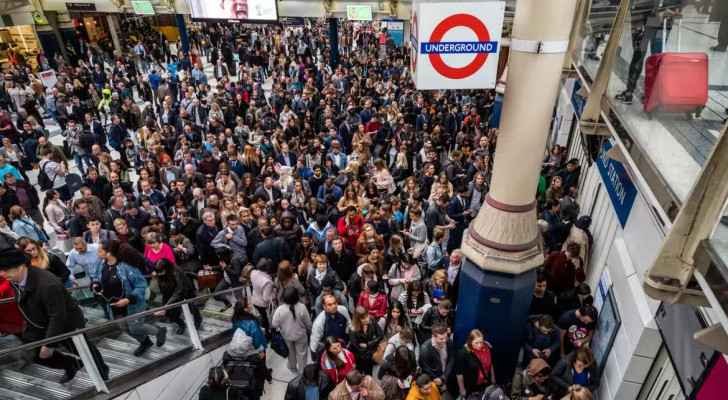 London Underground services were paralyzed on Friday and public transport was disrupted by a strike to raise wages in the face of Britain's highest inflation and in the wake of a major strike by rail workers.

A spokeswoman for Transport for London told AFP that "service on the London Underground was suspended even if two lines were providing limited journeys," with a train approximately every 15 minutes.

Bus traffic has also been affected, which has become overcrowded because many Londoners have resorted to this means of transport.

In front of Black Horse Road station (North East London), people gathered waiting for the limited opening of the suburban (Overground) rail network, which was operating on a limited Friday.

"The suburban rail network only, no metro today," shouted an employee who was not committed to the strike, addressing the passengers, many of whom were unaware of the workers' protest movement.

"I'm going to be late for work. I have to go to central London," said a young woman, as she hurried out of the station and headed for the nearby bus station.

Many train users sympathized with the striking workers on Thursday, but some Londoners were less lenient on Friday by being late for work.

"I understand the message the strikers want to pass on to the officials, but London is a big city and many people need to get to work," said Catherine Ondo, a 25-year-old saleswoman.

"I don't know how I'm going to go to work," said Greg Scalkey, 43, a construction worker. He criticized "the prices of Transport Authority cards in London, which have risen dramatically," stressing that the salaries of the general operator are higher than the average wage in the country.

Britain is witnessing a new wave of massive strikes in the transport, postal and port sectors, in the largest protest movement in decades in the face of inflation. Saturday is expected to witness a new strike of the rail network.

Negotiations with several private sector rail operators are deadlocked according to the unions. The latter also rejected an offer of an eight percent wage increase over two years at Network Rail, the public company that runs railways, accused of resorting to mass layoffs.

Two police officers stabbed in London ahead of queen's ....