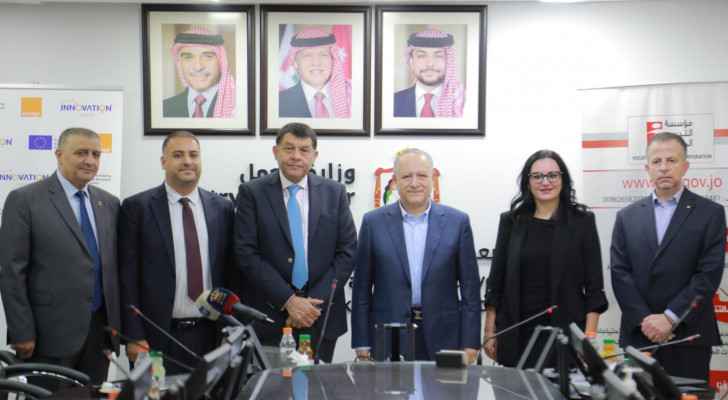 Under the patronage of the Minister of Labor, Nayef Stetieh, Orange Jordan signed an agreement on Sunday, August 14, 2022, with the Vocational Training Corporation to launch Orange FabLab, a coding academy, and an accelerator at a vocational training center in Al-Salt in the governorate of Balqa.

The Director General of the Vocational Training Corporation, Engineer Ahmed Gharaibeh, and Orange Jordan's Deputy CEO/CFO, Raslan Deiranieh, signed the agreement to launch the programs, as part of “Innovation Space”, a three-year project co-funded by the EU’s “Innovation for Enterprise Growth and Jobs” program aiming to promote digital empowerment and innovation culture on a wider scale.

The new free digital programs that will be launched at the vocational training corporation in Balqa are an extension of the “Innovation Space” project that seeks to expand Orange’s free digital programs and give youth the opportunity to benefit from training in digital skills growing in demand to enhance their employability and support them in launching their own projects.

Under the agreement, the new programs in Balqa will include an Orange FabLab to train the applicants on digital fabrication skills, tools, and machinery to enable joiners to create prototypes, the coding academy to train students for 7 months on programming languages with the aim of “Training for Employment”, in addition to an accelerator supporting startups to enhance their growth and expansion.

The Minister of Labor, Nayef Steitieh, affirmed that this agreement comes to effect after several meetings and workshops held during the last five months with Orange Jordan, the responsible digital leader, and one of the global Orange group’s subsidiaries, through its corporate social responsibility strategy, in response to the directives of HM King Abdullah II and the crown prince Al Hussein Bin Abdullah II, and within the government’s directions to modernize and update the vocational training ecosystem, to create a sustainable impact on the lives of Jordanians.

Orange Jordan's Deputy CEO/CFO, Raslan Deiranieh, expressed excitement about the cooperation between Orange Jordan and the Vocation Training Corporation towards achieving common goals that will contribute to empowering youth with the needed skills to join the labor market, noting that the digital programs in Balqa are part of Orange Jordan’s keenness to cover the Kingdom’s regions through expanding in the Capital, North and South, as the number of beneficiaries/certificates granted within the “Innovation Space” project reached 20,000.

The company, added Deiranieh, is committed to expanding the circle of beneficiaries under the “Innovation Space” project, stemming from Orange Jordan’s role as a responsible digital leader that drives sustainable empowerment to enhance the beneficiaries’ contribution to socioeconomic progress. He also expressed pride in the strategic partnerships working towards this goal.

The Director General of the Vocational Training Corporation, Engineer Ahmed Gharaibeh, stated that the corporation is keen to promote partnership with all parties linked to vocation and technical training in developmental sectors to provide sustainable training and employment opportunities for males and females and to contribute to the government's efforts to employ youth in the Kingdom’s governorates.

The corporation's future plans include turning to technological applications, AI, IoT, the science and coding of robotics, and data management fields, Gharaibeh noted.

The EU-funded “Innovation Space” project supports the expansion of Orange Jordan’s digital programs to include 9 Community Digital Centers, 5 new coding academies, 5 FabLabs, 8 start-up accelerators and incubators, in addition to an “Innovation Hub” at the Orange Digital Village in Amman.

The program is a pioneering initiative in Jordan and a one-stop shop for digital innovation and entrepreneurial support. It introduces digital culture, fosters digital skills – especially among women and youth – and promotes and nurtures entrepreneurship by identifying key opportunities for digital economic growth.

Daylight saving time will be throughout the year in ....

Daylight saving time will be throughout the year ....

Daylight saving time will be throughout the ....

Daylight saving time will be throughout ....