Iran's nuclear saga: from 2015 accord to new talks

Iran's nuclear saga: from 2015 accord to new talks 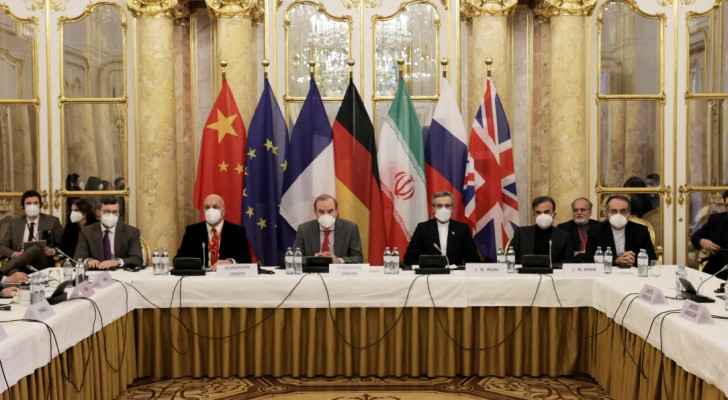 The main developments in Iran's nuclear programme since 2015, as envoys of the United States, European Union and Iran travel to Vienna for talks on salvaging a landmark 2015 accord, according to AFP.

On July 14, 2015, Iran and the five permanent members of the UN Security Council -- Britain, China, France, Russia and the United States -- plus Germany reach a historic accord in Vienna.

The deal places significant restrictions on Iran's nuclear programme in exchange for sanctions relief after 12 years of crisis and 21 months of protracted negotiations. It comes into force on January 16, 2016.

Under the accord, Tehran's nuclear programme is placed under strict UN control subject to guarantees it is not trying to make an atom bomb, something Iran has always denied.

US president Donald Trump walks away from the deal on May 8, 2018.

"We cannot prevent an Iranian nuclear bomb under the decaying and rotten structure of the current agreement," he says.

Deal critics had complained from the start about the time limits applied to the deal.

Later in 2018, Washington begins reimposing sanctions on Iran and companies with ties to it, hitting the central bank and the country's vital oil sector.

In May 2019, Iran starts rolling back on its deal commitments in retaliation.

Trump hits back by sanctioning Iran's steel and mining sectors.

Tehran increases its stockpile of enriched uranium in excess of the limits laid down in the deal.

It announces in early 2020 it is foregoing a limit on its number of uranium-enriching centrifuges.

In 2021, Iran says it has started enriching uranium to up to 60 percent -- many times the limit of 3.67 percent imposed by the deal -- which the International Atomic Energy Agency (IAEA) says could be sufficient to create a compact nuclear explosive.

In April 2021, with President Joe Biden now in the White House, talks on rescuing the accord start in Vienna.

Iran's new ultraconservative president, Ebrahim Raisi, says in August he is open to negotiations but will not be pressured by sanctions.

Just as a deal looks imminent, Russia enters Ukraine on February 24, 2022 and Moscow becomes the target of international sanctions. The negotiations are delayed.

In mid-March, Washington says a compromise is "close", but Tehran raises some "red line" issues, including its bid to have all sanctions lifted.

On March 30, Washington sanctions suppliers to Tehran's ballistic missiles programme, which Iran dubs "another sign of the US government's malice" towards the Islamic republic.

On June 8, the IAEA adopts a resolution submitted by Britain, France, Germany and the United States that condemns Iran for the first time in two years.

On June 16, Washington sanctions a network of Iranian petrochemical firms.

In late June, two days of EU-brokered indirect talks in Doha between Iran and the United States conclude with no progress.

On July 26, EU foreign policy chief Josep Borrell says he has submitted a draft text of a deal, urging parties to accept it or "risk a dangerous nuclear crisis".

On August 3, the US, EU and Iran nuclear envoys say they are travelling to Vienna for talks on salvaging the accord.