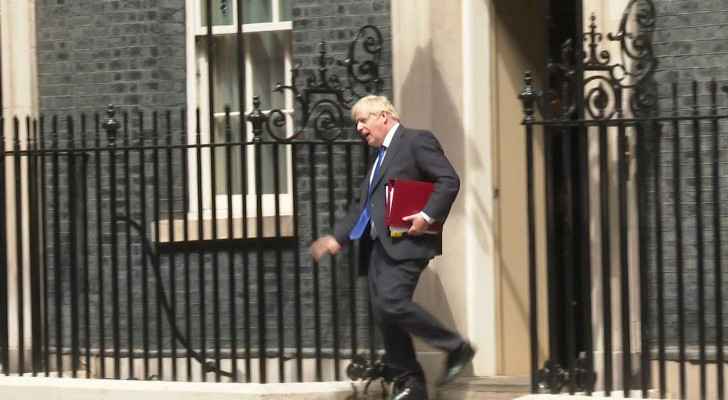 Boris Johnson's position as UK prime minister was on the brink on Wednesday, after two of his senior ministers quit in protest at his scandal-hit leadership, piling on pressure as he faced a grilling from angry MPs.

Both said they could no longer tolerate the culture of scandal that has stalked Johnson for months, including lockdown lawbreaking in Downing Street that enraged the public who followed the rules.

Sunak and Javid will now sit on the Conservative backbenches at the weekly session of Prime Minister's Questions at 1100 GMT, which promises to be even more combustible than usual.

Johnson then faces an hours-long grilling from the chairs of the House of Commons' most powerful committees, who include some of his most virulent critics in the Tory ranks.

The exits of Sunak and Javid came just minutes after Johnson apologized for appointing a senior Conservative, who quit his post last week after he was accused of drunkenly groping two men.

Former education secretary Nadhim Zahawi was handed the finance brief. "You don't go into this job to have an easy life," Zahawi told Sky News on Wednesday.

"Sometimes it's easy to walk away but actually, it's much tougher to deliver for the country."

Days of shifting explanations had followed the resignation of deputy chief whip Chris Pincher. Downing Street at first denied Johnson knew of prior allegations against Pincher when appointing him in February.

But by Tuesday, that defense had collapsed after a former top civil servant said Johnson, as foreign minister, was told in 2019 about another incident involving his ally.

Minister for children and families Will Quince quit on Wednesday, saying he was given inaccurate information before having to defend the government in a round of media interviews on Monday.

Junior transport minister Laura Trott quit at the same time, saying the government was fueling a lack of "trust" in the government.

The Pincher affair was the "icing on the cake" for Sunak and Javid, Tory MP Andrew Bridgen, a strident Johnson critic, told Sky News.

"I and a lot of the party now are determined that he will be gone by the summer recess (starting on July 22): the sooner the better."

The resignations dominated the British media, with even some of Johnson's staunchest newspaper backers doubting whether he could survive the fall-out.

Other senior cabinet ministers, including Foreign Secretary Liz Truss and Defence Secretary Ben Wallace, still backed Johnson, but many were wondering how long that may last.

Johnson only narrowly survived a no-confidence vote among Conservative MPs a month ago, which ordinarily would mean he could not be challenged again for another year.

But the influential "1922 Committee" of non-ministerial Tory MPs is reportedly seeking to change the rules.

"Losing chancellors is something that happens," he said on Sky News, pointing to past Tory leaders -- although Margaret Thatcher was ultimately felled by a cabinet revolt by top allies.

Sunak's departure in particular, in the middle of policy differences over a cost-of-living crisis sweeping Britain, is dismal news for Johnson.

Johnson, who received a police fine for the so-called "Partygate" affair, faces a parliamentary probe into whether he lied to MPs about the revelations.

Pincher's departure from the whips' office -- charged with enforcing party discipline and standards -- marked yet another allegation of sexual misconduct by Tories in recent months, recalling the "sleaze" that dogged John Major's government in the 1990s.

Conservative MP Neil Parish resigned in April after he was caught watching pornography on his mobile phone in the House of Commons.

That prompted a by-election in his previously safe seat, which the party went on to lose in a historic victory for the opposition Liberal Democrats.

Labor, the main opposition party, defeated the Conservatives in another by-election in northern England on the same day, prompted by the conviction of its Tory MP for sexual assault.

Hundreds of people to go out of jobs as BBC decides to ....

Hundreds of people to go out of jobs as ....

UK PM Johnson to support successor Truss 'every step of ....