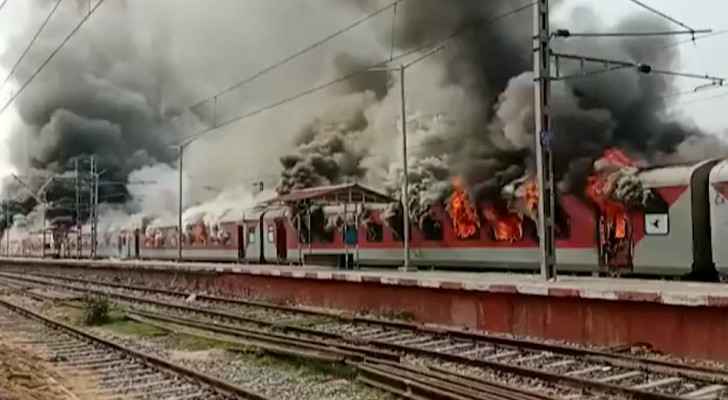 Indian police fired at an angry mob who set trains on fire Friday during protests against a new short-term military recruitment scheme that have flared around the country.

Hundreds of people had stood on tracks in the southern city of Secunderabad, burning piles of debris to block passenger rail services and setting alight carriages on at least four trains.

Officers fired live rounds to disperse the protesters, an AFP photographer at the scene witnessed, with at least one demonstrator wounded in the incident.

Local police and officials in Telangana state could not be reached for comment.

Protests have raged in several cities around the country since Thursday, when police in eastern Bihar state fired tear gas at crowds who set train carriages alight and tried to storm government buildings.

This week the Indian government announced a temporary recruitment plan to induct young adults into the armed forces for four years -- a major break from the past, as non-commissioned ranks are seen as lifetime jobs.

The new recruits will miss out on entitlements enjoyed by existing personnel, including government pensions, unless they are retained after the four-year programme.

Prime Minister Narendra Modi's government pitched the recruitment plan as a pathway to modernize India's armed forces with a younger and leaner soldier corps, while also creating hundreds of thousands of new jobs.

Unemployment has long been a millstone around the Indian economy's neck, with joblessness figures at their worst since the 1970s even before the Covid-19 pandemic wreaked havoc on local commerce.

Death toll from Iran unrest climbs to 17 as internet ....