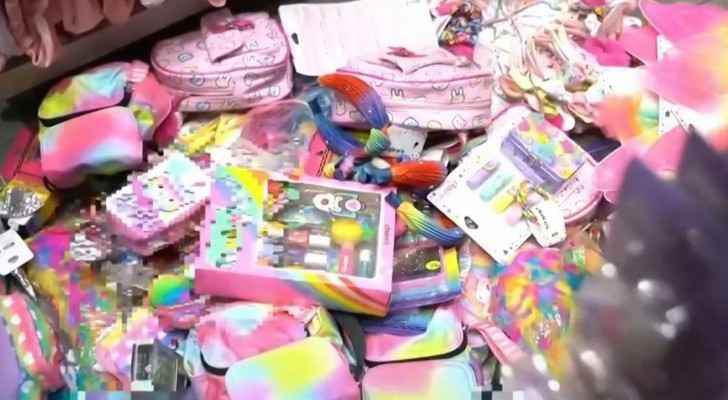 Saudi officials are seizing rainbow-coloured toys and articles of clothing from shops in the capital as part of a crackdown on homosexuality, state media reported.

The conservative kingdom opened up to tourism in 2019 but, like other Gulf countries, regularly attracts scrutiny for its human rights record, including its outlawing of homosexuality, a potential capital offence.

Items targeted in the recent raids include rainbow-coloured bows, skirts, hats and pencil cases, most of them apparently manufactured for young children, according to a report broadcast Tuesday evening by the state-run Al-Ekhbariya news channel.

"We are giving a tour of the items that contradict the Islamic faith and public morals and promote homosexual colours targeting the younger generation," says an official from the commerce ministry, which is involved in the campaign.

Gesturing towards a rainbow flag, a journalist says: "The homosexuality flag is present in one of the Riyadh markets."

The colours send a "poisoned message" to children, the report says.

The report did not detail how many establishments were targeted or items seized in the commerce ministry operation, and Saudi officials did not respond to an AFP request for comment Wednesday.

The rainbow raids come as Saudi Arabia gains headlines for restrictions on films that depict, or even refer to, sexual minorities.

In April, the kingdom said it had asked Disney to cut "LGBTQ references" from "Doctor Strange in the Multiverse of Madness", the latest Marvel movie, but that Disney had refused.

Saudi regulators objected to a scene that amounted to "barely 12 seconds" in which one character refers to her "two moms".

An official told AFP at the time that the government was trying to work with Disney to find a solution, but ultimately the film did not screen in Saudi cinemas.

Disney's latest animation "Lightyear," which features a same-sex kiss, has also been banned in Saudi Arabia and more than a dozen other countries, a source close to Disney told AFP Tuesday.

Riyadh has not commented on that film, but it has not appeared in the coming attractions of major cinemas.

Saudi Arabia lifted a decades-long ban on all cinemas in late 2017, part of a series of social reforms spearheaded by Crown Prince Mohammed bin Salman that are shaking up the deeply conservative kingdom.

The country has since seen significant growth in movie ticket sales, with revenues totalling $238 million in 2021, a 95-percent increase from the previous year, Variety magazine reported in January.