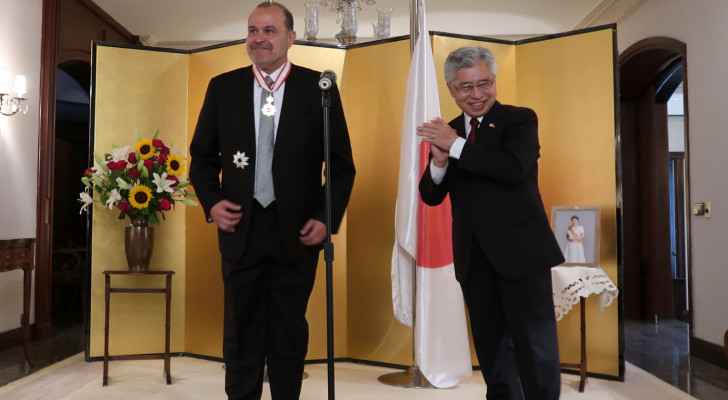 On June 1, 2022, the Embassy of Japan in Jordan held a ceremony at the Japanese Ambassador's residence to award His Excellency Mr. Hussein Hazza’ Majali, Senator and Former Interior Minister and Director of Public Security Directorate of the Hashemite Kingdom of Jordan, with the Decoration of “The Order of Rising Sun, Gold and Silver Star” .

HE Mr. Majali, when he was holding posts of Director of PSD and Interior Minister, spared no efforts in preserving the peace and safety for the society in Jordan including Japanese community, as well as extended his ungrudging support to Japan under the leadership of His Majesty King Abdullah II, including contribution in facilitating the security cooperation between Jordan and Japan.

The ceremony was attended by many guests including former ministers and high-rank government officials in celebration of H.E. Mr. Majali’s conferment and further strengthening relationships between Japan and Jordan.

Former Japan PM Abe mourned at wake as US hails 'man of ....