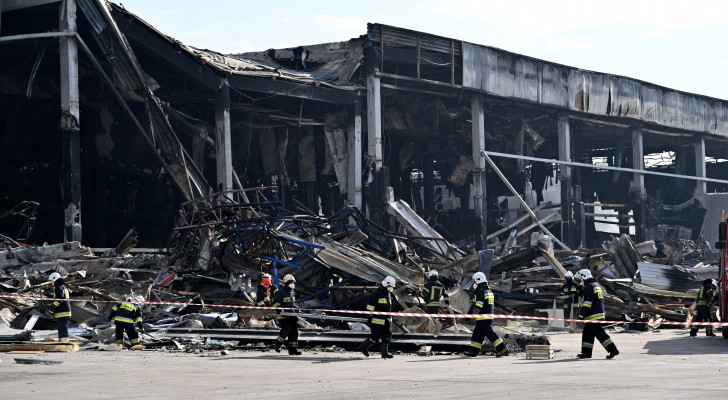 More than 1,000 Ukrainian soldiers including senior commanders remain inside the besieged Azovstal steel plant in Ukraine's port city of Mariupol, a pro-Russian separatist leader said Wednesday, according to AFP.

Russia's defense ministry says that 959 Ukrainian soldiers have surrendered since Monday at the plant, which has become a symbol of Ukrainian resistance to Russian forces.

Speaking to reporters in Mariupol, the leader of the breakaway Donetsk People's Republic, Denis Pushilin, said there had been about 2,000 fighters in the sprawling industrial complex and "a little more than half" remained inside.

"Commanders and high-ranking fighters of (the) Azov (regiment) have not yet come out," he told journalists, including from AFP, on a press tour organized by the Russian military.

The Azov regiment, a former paramilitary unit created in 2014, has integrated into the Ukrainian armed forces. Russia describes the unit, which has previous links to far-right groups, as a neo-Nazi organisation.

Russia last month claimed control of Mariupol after a weeks-long siege, but hundreds of Ukrainian soldiers remained holed up in underground tunnels beneath the huge Azovstal industrial zone.

Pushilin said the forces inside the plant were running out of supplies and had been left with little choice but to surrender.

Russia's defense ministry said that 80 wounded were among those who had surrendered since Monday and that some were being treated in a hospital in the town of Novoazovsk in Russian-controlled territory.

Pushilin said some of the wounded were also being treated in the city of Donetsk and that the rest of those who emerged from the plant were being held under guard in a prison colony.

Kyiv is hoping to exchange the Ukrainian fighters, but Russia has yet to confirm whether they will be part of a prisoner swap.

Pushilin suggested some of the Ukrainians could face trial.

"As for war criminals and those who are nationalists, if they lay down their weapons their fate will be in the hands of the court," he said.

Kyiv's defense ministry has said it would do "everything necessary" to rescue those still in the steelworks, but admitted there was no military option available.