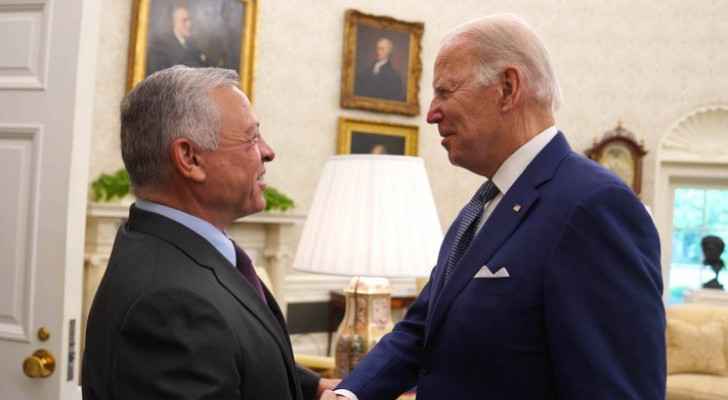 His Majesty King Abdullah II and US President Joe Biden held a summit meeting, Friday, in the presence of HRH Prince Al Hussein bin Abdullah II, the Crown Prince, at the White House.

His Majesty stressed the depth of the friendship and strategic partnership relations between the two countries.

In turn, President Biden affirmed his full support for Jordan, under the leadership of His Majesty the King, praising the Kingdom as a pivotal partner for the United States in the Middle East, and a key element in promoting stability in the region.

The meeting dealt with the latest regional and international developments, especially the Palestinian issue, as His Majesty called for intensifying international efforts to re-launch negotiations between the Palestinian and Israeli Occupation sides, leading to the establishment of an independent Palestinian state on the June 4, 1967 lines, with East Jerusalem as its capital.

His Majesty referred to the pivotal role of the United States in this regard, warning against a recurrence of the cycle of violence in the Palestinian territories as a result of unilateral Israeli Occupation measures.

For his part, President Biden affirmed the United States' support for the two-state solution and the need to find mechanisms to reduce escalation and support calm efforts in the Palestinian territories.

The US President stressed the need to preserve the current historical situation in Haram al Sharif, stressing the pivotal role of the Hashemite guardianship in Jerusalem.