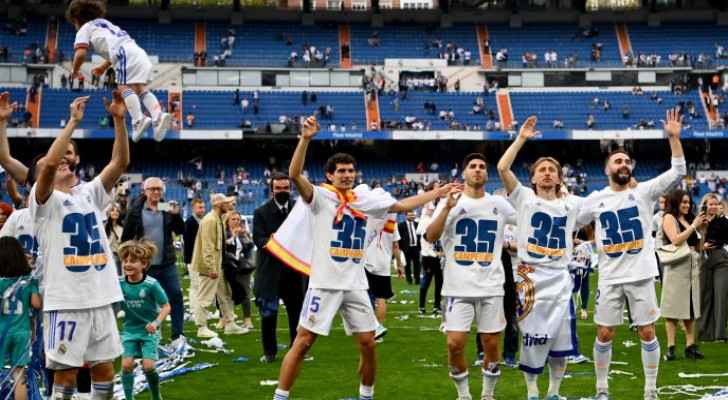 Real Madrid secured a 35th La Liga title on Saturday with a 4-0 home win over Espanyol as Carlo Ancelotti became the first coach to win all five major European leagues.

Needing just one point from their last five games, Madrid struck twice through Rodrygo in the first half at the Santiago Bernabeu before goals from Marco Asensio and Karim Benzema completed the victory.

Madrid lifted the trophy in front of nearly 80,000 in the Spanish capital. Some 250,000 supporters were expected to attend the team's traditional celebrations at the Cibeles fountain.

"It's the first time I've won a title at the Bernabeu, the atmosphere is really something special," Ancelotti told Movistar Plus.

"If I was crying (at the final whistle), it's because I'm happy."

Ancelotti returned to Madrid last summer to take over from Zinedine Zidane for a second spell after quitting Everton.

The Italian has also won the Premier League with Chelsea, Serie A with AC Milan, Ligue 1 with Paris Saint-Germain and the Bundesliga with Bayern Munich.

Given they have been top since November, it was no surprise that Madrid won a league they have dominated for months, but dips in form from Barcelona and Sevilla offered the chance for an early coronation.

Madrid moved 17 points clear of second-placed Sevilla with four matches to play. Barcelona have a game in hand but are 18 points adrift.

With La Liga wrapped up, Madrid can turn their full attention to the second leg of their semi-final at home to Manchester City on Wednesday, when they will need to overturn a 4-3 loss from the opening game to advance to another European final.

"Winning La Liga is special," midfielder Luka Modric told Real Madrid TV, as he paid tribute to the fans who were unable to watch the club win the title in 2020 due to the Covid-19 pandemic.

"We played a great match, the atmosphere was incredible and we hope to repeat that Wednesday."

It is the earliest Madrid have clinched the trophy since they won it with four games to spare in 1989-90.

"It's the first time we've won it with as many games to go, that means a lot. We've had an incredible season and now we want to celebrate that a bit," said Modric.

Ancelotti rested Benzema and Vinicius Junior from the start for the visit of Espanyol, and Rodrygo seized his chance with two goals late in the first half.

He combined with fellow Brazilian Marcelo to put Madrid ahead on 33 minutes as he steered into the far corner for only his second league goal this campaign.

Mariano Diaz, handed a rare start in attack, then won the ball deep in Espanyol territory and Rodrygo rolled in a second with a clinical finish past goalkeeper Diego Lopez.

Eduardo Camavinga played in Asensio to slam in a third for Madrid on the counter on 55 minutes, with Modric then making way for Toni Kroos and Benzema replacing Casemiro on the hour.

Benzema notched his 42nd goal in as many games this season across all competitions to seal a runaway triumph for Madrid on a historic day for Ancelotti.