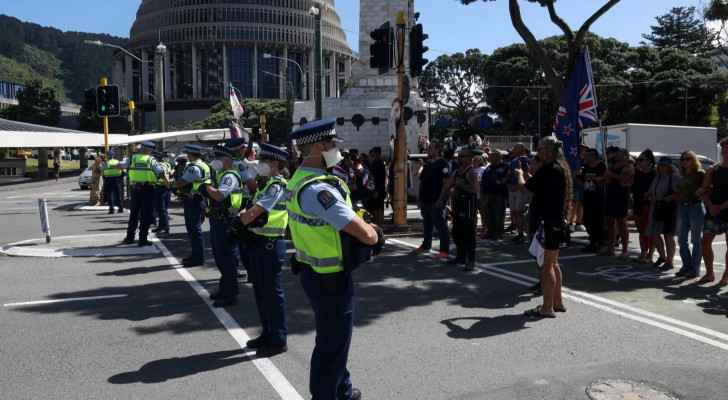 Health authorities reported 1,160 new coronavirus cases, the most since the pandemic began, as the Omicron variant continues to spread in a country that was largely virus-free until August.

While there have only been 53 virus deaths in the nation of five million, some protesters have taken to the streets railing against Covid-related restrictions and a government vaccination drive.

Demonstrators inspired by Canada's "Freedom Convoy" jammed roads with cars, trucks and campervans last week, then set up camp on the lawns of parliament in the capital Wellington.

A tense stand-off in the city center has stretched for nine days, with police largely taking a hand-off approach, aside from violent clashes last Thursday that led to the arrest of 122 protesters.

But law enforcement officials ramped up the rhetoric late Tuesday, describing the protests as "untenable" and saying tow trucks would be used to clear the streets.

Police Commissioner Andrew Coster said he had asked for the military's help, warning anyone who obstructed the "imminent" operation that they faced arrest.

However, no tow trucks were deployed Wednesday, and when a line of police tried to take control of an area near the parked vehicles, they were met by massed demonstrators chanting "whose streets, our streets".

"This remains an incredibly challenging and complex situation to manage, and police are taking care not to escalate matters unnecessarily," he said.

Police have previously expressed concern about the large number of children in the protest camp, accusing demonstrators of trying to use them as human shields to avoid arrest.

Parliamentary speaker Trevor Mallard, who is responsible for running the legislature, took matters into his own hands over the weekend, blasting pop music at the demonstrators on a loop.

Police said they did not condone the tactics.

Belbisi explains reason behind increase in number of COVID ....