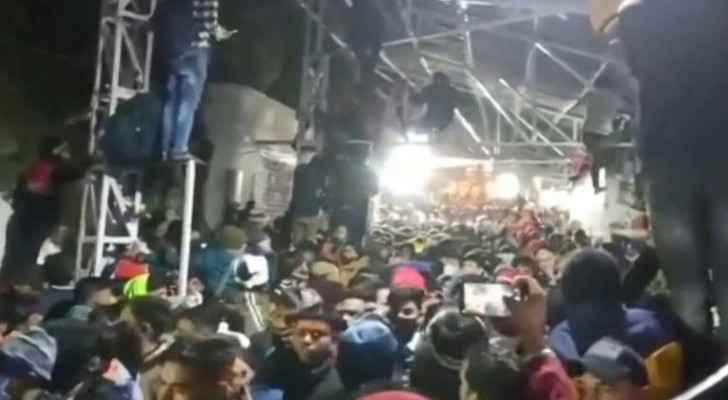 At least 12 people died and 13 were injured in a stampede at a religious shrine in India in the early hours of Saturday as thousands of pilgrims massed to offer prayers, officials said.

The disaster happened around 3:00 am (2130 GMT) while it was still dark on the route to the Vaishno Devi shrine in Indian-administered Kashmir, one of the country's most revered Hindu sites.

"People fell over each other... It was difficult to figure out whose leg or arms were tangled with whose," witness Ravinder, who gave only one name, told AFP by phone from the scene.

"I helped pick up eight bodies by the time ambulances arrived after about half an hour. I feel lucky to be alive but am still shaking with memory of what I saw," he said.

One official said that there was a rush to offer special prayers for the new year but this was not confirmed by others.

Millions of shrines dot Hindu-majority India's cities, towns and villages as well as remote sites in the Himalayas or in jungles in the south.

Before the pandemic, every day about 100,000 devotees would trek up a steep winding track to the narrow cave containing the shrine to Vaishno Devi.

Authorities had capped the daily number to 25,000 but witnesses and press reports said that this may have been exceeded several times over.

Two stampedes in as many months in India in 2008 left more than 370 Hindus dead. Others in Kerala in 2011 and in Madhya Pradesh two years later each killed more than 100.

In the latest incident, other reports suggested an argument had broken out between devotees.

Rescue operations started immediately and the injured -- some of whom were reported to be in a serious condition -- were taken to hospital.

Video footage on social media showed small minivan ambulances with flashing lights rushing to hospitals while it was still dark, as well as massive crowds.

Access to the shrine was halted after the stampede but later resumed.

The shrine to Vaishno Devi, a manifestation of Hindu goddess Vaishnavi, is in the hills some 60 kilometers from the city of Jammu.

People travel to the nearby busy town of Katra and then trek upwards for around 15 kilometers on foot or by pony -- there is also a helicopter service -- to the cave entrance where they often have to wait for hours.

Ravinder, the witness, said that the crush happened at a point where huge crowds of people coming down from the shrine meet those going up.

"No one was checking registration slips of the devotees. I have been there many times but never seen such a rush of people," he said.

"It was only when some of us managed to lift a dead body up with our hands that people could see (what was happening) and made space for moving the bodies out," he said.

Another witness who came from Ghaziabad outside New Delhi with a group of around 10 people said there was "mismanagement'.

"If we knew that so much crowding was happening, they should have stopped the people," the man said without giving his name.

Modi said on Twitter that he was "extremely saddened."

Other senior officials including the president offered their condolences, and the home minister called the tragedy "heart-wrenching."

Washington says several Americans among those dead in ....

Washington says several Americans among those ....

Washington says several Americans among those ....