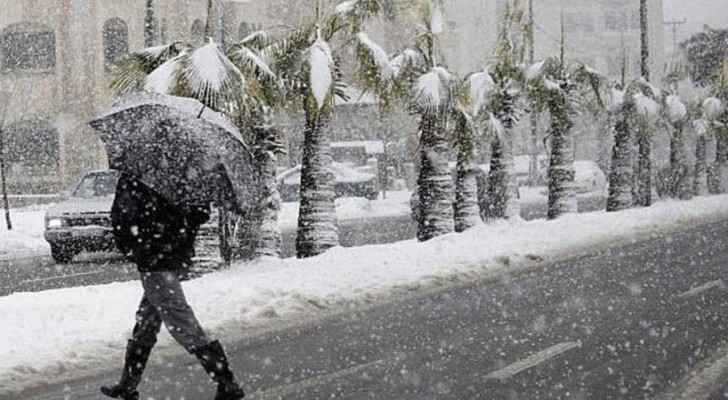 Monday, the Director of Operations at ArabiaWeather Osama Al-Tarifi said that there will be a significant change in weather conditions during the next few hours, as the weather will be very cold, accompanied with strong winds, thunderstorms and heavy rainfall.

Tarifi added to Roya’s Akhbar Al Sabe’a that some regions of the Kingdom will witness hours of continuous heavy rain.

He pointed out that during the afternoon and evening hours, the impact of the air depression will deepen, as it is expected that a new air front will cross the Levant region, resulting in stormy, cloudy and rainy weather.

Tarifi also noted that during the afternoon and evening hours of Monday, there will be strong winds accompanied by strong gusts.

He explained that there will be showers of snow for a short period of time, especially over the high mountain heights,  noting that it is expected that showers of snow will fall over mountainous areas that are higher than 1,200 meters, and at times accumulate over areas that are higher than 1,300 meters, which include parts of the Sharah Mountains in the governorates of Tafilah and Ma’an.

Also Read: ArabiaWeather announces which areas will be covered in snow

Earlier Sunday, Founder and CEO of ArabiaWeather, Muhammad Al-Shaker, said that the air depression expected to affect Jordan on Monday is an unusual one.

Shaker added, in an interview with Roya’s Nabd Albalad, that snow will fall in some of Jordan’s highlands.

Some areas in Tla’a Al Ali and Sweileh might be covered in snow, according to Shaker.

The highlands that will witness the most snow on Monday are Rashidiyyah, Qadisiya, Rajeh, Qrandal, Shoubak Heights, Heisha Heights, some Mubrak Heights in the south, areas in Mafraq that border Syria (Deir Al-Kahf, Tal Al-Ramah).