Blinken: Africans do not have to 'choose' between China, US

Blinken: Africans do not have to 'choose' between China, US 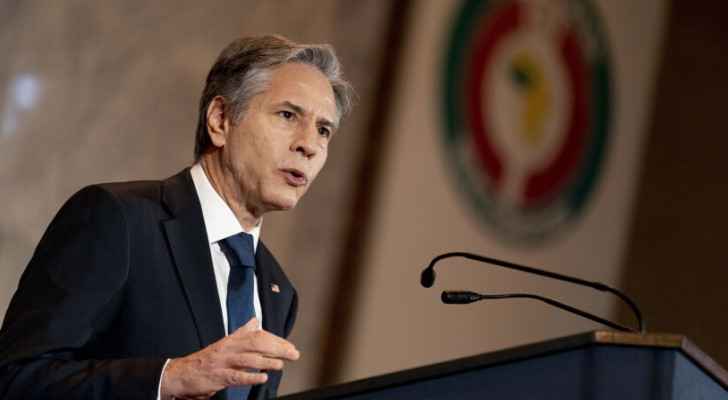 US Secretary of State Anthony Blinken stressed Thursday that Africans should not "choose" a side in the escalating rivalry between China and the United States, stressing, however, that the US can offer more in terms of democratic rights.

A few days before China held a summit with Africa in Senegal, Blinken announced that US President Joe Biden intends to host a summit with the continent's leaders.

In a speech at the Economic Community of West African States (Cediao) headquarters in Nigeria's capital, Abuja, Blinken did not mention China by name, but said Africans were "wary of the conditions" that often accompany foreign commitments.

"I want to be clear: The United States does not want to limit your partnerships with other countries," he added.

"We want to strengthen our partnerships further, we don't want you to choose, we want to give you options... Our approach will be sustainable, transparent and value-based."

He said that agreements with other countries on infrastructure may be "vague and coercive, drowning countries in huge debts, destroying the environment and not always benefiting the people who live there."

"We will do things differently," he said.

The US diplomat acknowledged the mistrust of many African countries.

"African countries have often not been treated as equal partners, but as secondary partners or even worse," he said.

"We are also aware that decades of colonialism, enslavement and exploitation left a painful legacy that is still alive today," he added.

But he stressed that the Biden administration "is firmly convinced that it is time to stop treating Africa as a geopolitical file, and start treating it on the basis of what it is today, a major geopolitical player."

Blinken, who started his African tour in Kenya and will conclude it in Senegal, promised cooperation in the fight against climate change and COVID-19.

- The decline of democracy -

Biden made a new commitment to Africa, but also to democracy, while his predecessor, Donald Trump, showed no interest in either.

In December, the president will hold an online summit of democracies to demonstrate his solidarity in the face of the rise of authoritarian leaders around the world.

Blinken acknowledged that the United States is not an ideal model of democracy, as evidenced by the storming of the Capitol by Trump supporters on January 6, while Congress was ratifying the outcome of the presidential election that Biden won.

"The decline of democracy is not an exclusively African problem, it is a global problem. My country itself is fighting threats to our democracy. The solutions to these threats will come as much from Africa as they will from anywhere else," he said.

"We must demonstrate how democracies can meet the aspirations of citizens quickly and effectively," he added.

The Biden administration considers China one of the major challenges facing the United States in the twenty-first century, in light of its rapid growth and growing presence on the international scene.

US State Department spokesman Ned Price, who also came to Abuja, accused Beijing of threatening "regional peace and stability" in Asia, a day after the Philippines, a US ally, accused the Chinese coast guard of firing water cannons at its ships in the China Sea. disputed south.

In recent years, China has invested huge sums in the African continent, especially in infrastructure and in raw materials, especially gold and wood.

Thursday, Nigerian Foreign Minister Jeffrey Onyeama dispelled concerns about China, stressing during a joint press conference with Blinken that Asian power provides a "great opportunity" for a country in need of infrastructure.

"We would have dealt with any other party that offered us an offer with a competitive interest for us," he said.

Vehicle strikes Christmas parade in US, killing five and ....

Vehicle strikes Christmas parade in US, ....