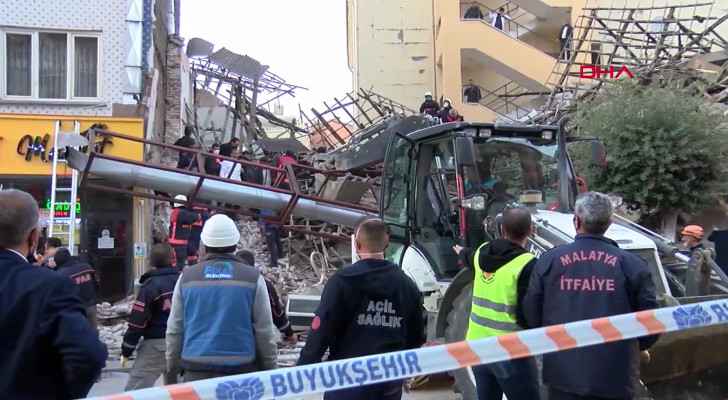 At least 13 people were injured on Tuesday and 10 others feared trapped under debris when a two-storey building housing restaurants and a coffee shop collapsed in eastern Turkey.

The incident occurred on a busy street in the eastern plains province of Malatya, some 160 kilometres (100 miles) north of the Syrian border.

Turkey's AFAD emergencies service said 13 people had been rushed to hospital as rescuers searched for signs of life under piles of debris spilling across one of Malatya's main thoroughfares.

Officials issued contradictory reports about how many people were believed to be inside the various restaurants and shops when the building crumbled at 4:50 pm.

Local mayor Osman Guder told Haberturk television that between 20 and 25 were believed to still be trapped inside.
The chairman of Malatya's main opposition CHP party, Enver Kiraz, put the number trapped at up to 30.

"On the first floor, there was a chicken restaurant, a dried nuts seller and bakery. And on the second floor there was a coffee house," Kiraz told AFP by telephone.

"It is a very busy street. As far as I know, some of the people were injured while passing by the building."

But Haberturk television later reported that only 10 people remained unaccounted for.

Television images showed rescuers using construction diggers to remove large blocks of debris and trying to listen for signs of any survivors as the evening set in.

Witnesses and media reports said the building collapsed during planned repair work that resulted in damage to one of the supporting columns.

"I heard a crack first and then the building collapsed. A cloud of dust emerged. It was like judgement day," witness Turhan Cobanoglu told Haberturk television.