Filipinos flock to cemeteries ahead of All Saints' Day closure 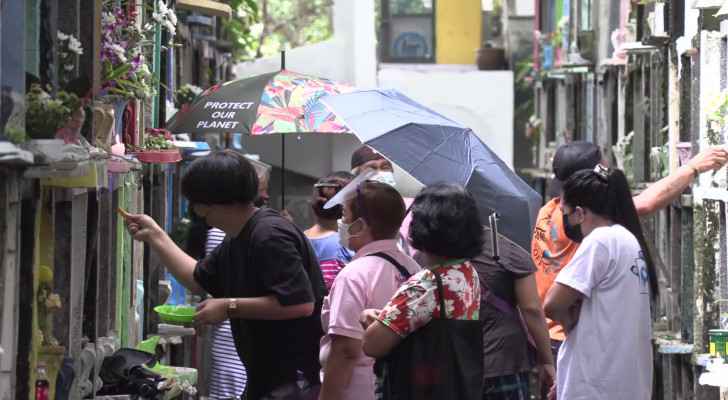 Thousands of people flocked to cemeteries in the Catholic-majority Philippines on Thursday for their last chance to visit dead loved ones ahead of a government-ordered nationwide closure of graveyards for All Saints' Day.

Filipinos usually pour into cemeteries on Nov. 1 for the ancient Christian tradition, many holding family reunions at the gravesites of relatives.

But for the second year in a row, the government has ordered the shuttering of cemeteries for fear the "day of the dead" could turn into a coronavirus superspreader event.

An official tally shows more than 60,000 people have poured into the sprawling Manila North Cemetery over the past few days where many poor people live in shanties and the mausoleums.

After passing through a temperature check, relatives placed small bouquets of white flowers and lit candles on tombs -- and then left.

Hours before the gates were locked Thursday, Eloisa Sebastian visited the grave of her 60-year-old mother, Erly, who died suddenly in April.

"We used to run to her whenever we had problems so it's difficult to accept (she's gone)," Sebastian told AFP.

"I still cry almost every day, even at work."

Major cemeteries in Manila are usually crowded for All Saints' Day -- a tradition dating back centuries to the ancient practice in Rome, which honours all saints and martyrs who died for the faith.

But the atmosphere was quiet and sombre Thursday with relatively few visitors.

"People have no money because of this pandemic," said Fernandez, whose bouquets cost 35 pesos (70 cents) each.

COVID-19 restrictions have devastated the economy and thrown millions out of work during the pandemic, which has seen more than 2.7 million people infected and over 42,000 killed.

In the pet section of the cemetery, Zia Garcia and her mother cleaned the gravestone of their Pomeranian-Shih Tzu mix dog Queenie, who died in February.

Flowers and candles were placed on the plaque engraved with the epitaph "We love you forever.”

She was "like my sister because I'm an only child," said Garcia, 23, wearing a mask and face shield.

"It's really sad because we grew up together -- my best friend and sister does not exist anymore."