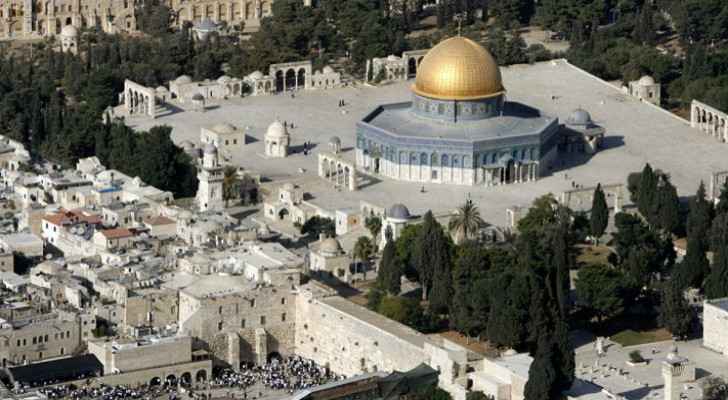 Tuesday, during an open discussion UN session on the situation in the Middle East, Jordan stressed that continued Israeli Occupation violations around Al-Aqsa Mosque are a threat to international peace and security.

In the statement, the mission said, "The practices of the occupation forces, settlers' and extremists' storming of the blessed Al-Aqsa Mosque/ Al-Haram Al-Sharif, obstructing the work of the Jerusalem Endowment Department and the affairs of the Jordanian Al-Aqsa Mosque in Al-Haram Al-Sharif, and attempts to impose a new fait accompli are Israeli violations of its obligations as an occupying power under international humanitarian law. The Security Council must assume its responsibilities to stop these violations and obligate them to respect the relevant Council resolutions, including Resolution 478 of 1980."

The statement reaffirmed that “the blessed Al-Aqsa Mosque/Al-Haram Al-Sharif, with its entire area and courtyards amounting to 144,000 square meters, is a place of worship purely for Muslims, and that the Department of Endowments for Jerusalem and the affairs of the blessed Al-Aqsa Mosque in Jordan is the legal authority with exclusive jurisdiction to manage all the affairs of the campus.”

The statement stressed that Jordan "will continue its role and efforts, based on the historical Hashemite custodianship of Islamic and Christian holy sites in Jerusalem, which is administered by His Majesty King Abdullah II, to protect and care for the holy sites and preserve the legal and historical status that exists there."

The statement recalled the Israeli Occupation violations that led to the cycle of violence, destruction and war on Gaza during the months of last April and May.

The mission stressed the importance of continuing efforts to consolidate and build on the ceasefire in the Gaza Strip, in order to achieve a comprehensive and sustainable calm, as well as efforts related to reconstruction in the Gaza Strip and the provision of development support to the rest of the Palestinian territories.

Jordan called on the international community to "exert its efforts to alleviate the humanitarian crisis in the Gaza Strip, by participating in the reconstruction efforts and putting pressure on Israel to end its illegal siege and respond to the basic and humanitarian needs of the people of the Strip, in line with its responsibilities in accordance with international law as an occupying power in the Strip."

The Israeli Occupation has imposed a blockade on the Gaza Strip, home to about two million people, for more than a decade.

The mission indicated that "the peace process today stands before two options, either a just peace that leads to the end of the occupation and the establishment of an independent Palestinian state on the lines of June 4, 1967, with East Jerusalem as its capital, according to the two-state solution, or the continuation of the conflict deepened by the continuous violations of the people's rights."

The Jordanian-Egyptian-Palestinian tripartite summit, which brought together His Majesty King Abdullah II, Egyptian President Abdel Fattah El-Sisi and Palestinian President Mahmoud Abbas in Cairo affirmed the rejection of the illegal Israeli Occupation measures that undermine the two-state solution and threaten the chances of achieving peace in the region, including the construction of settlements and their expansion in the occupied West Bank, including East Jerusalem, confiscation of land, demolishing homes and displacing Palestinians from their homes.

In this context, the mission stressed the need to respect the rights of Sheikh Jarrah's families in their homes.

Jordan and Sweden are preparing to hold an international conference on the United Nations Relief and Works Agency for Palestine Refugees “UNRWA” next month, “in continuation of their efforts to mobilize political support for it and translate it into practical and sustainable financial support to enable the agency to implement its mandate entrusted to it by the United Nations General Assembly.”

The mission stressed that "the Relief and Works Agency for Palestinian Refugees in the Near East (UNRWA) must continue to provide its services in accordance with its UN mandate until a just and lasting solution to the issue of Palestinian refugees is reached that guarantees their right to return and compensation in accordance with international law and relevant United Nations resolutions, especially the resolution 194, and in the context of a comprehensive solution that ends the occupation and leads to the establishment of an independent and viable Palestinian state with East Jerusalem as its capital on the June 4, 1967 lines, on the basis of the two-state solution and in accordance with the principles of international law.