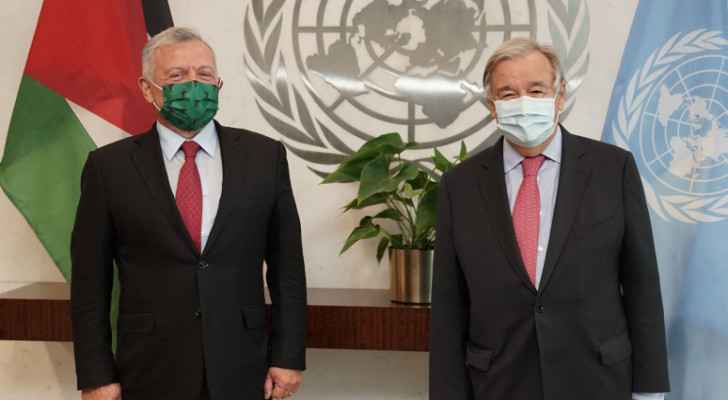 His Majesty King Abdullah II met with United Nations Secretary General António Guterres, in New York Tuesday, and commended his role in supporting the efforts towards regional and international peace and stability.

King Abdullah II stressed the important role of the UN and the international community in pushing the peace process forward, and relaunching negotiations between the Palestinians and the Israeli occupiers to reach just and comprehensive peace, on the basis of the two-state solution, leading to the establishment of an independent, sovereign, and viable Palestinian state on the 4 June 1967 lines, with East Jerusalem as its capital

His Majesty urged the international community to shoulder its responsibilities towards refugees and their host countries, especially the Palestinian refugees, to alleviate the economic burdens on them, and enable host countries to sustain the delivery of basic services, stressing the need to maintaining support for UNRWA.

Discussions at the meeting also covered efforts to reach political solutions to regional crises, as well as regional and international efforts to fight terrorism within a holistic approach.

Deputy Prime Minister and Foreign Minister Ayman Safadi, Director of the Office of His Majesty Jafar Hassan, and Jordan’s Permanent Representative to the UN Mahmoud Hmoud attended the meet