Millions of pills, 3,000 kg of hashish destroyed through 47 AND cases

Millions of pills, 3,000 kg of hashish destroyed through 47 AND cases 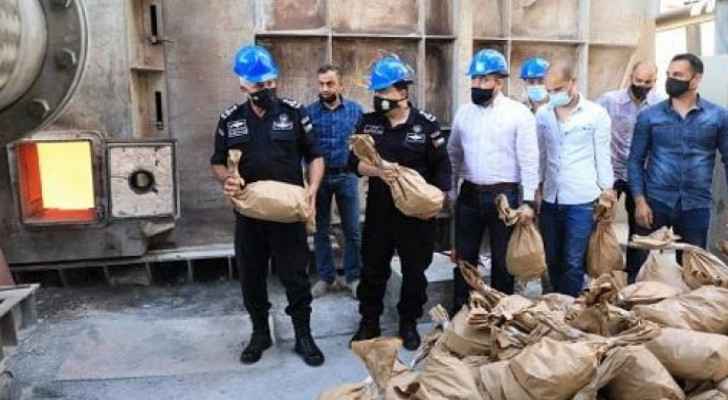 Wednesday, the Anti-Narcotics Department (AND) of the Public Security Directorate (PSD) destroyed quantities of narcotic substances that were seized through 47 cases, as part of the PSD's strategy in implementing the provisions of the law and cracking down on drug abuse.

Qudah indicated that the quantities of destroyed drugs in various cases between trafficking, possession and smuggling include 2,814 kilograms of hashish, 49 kilograms of cocaine, 108 kilograms of 'Joker powder,' 24 kilograms of marijuana, 100 kilograms of synthetic cannabis, 14,700,000 Captagon pills, and 117,000 other pills.

Qashha said work is continuing around the clock in all regions of the Kingdom to implement the security strategy that was developed to combat the scourge of drugs, adding that the efforts of eliminating narcotics abuse contributed to the seizure of large quantities of illegal substances that were destroyed Wednesday.

Qashha added that the size quantities seized are evidence of the level that Jordan has achieved in the field of drug control and its ability to confront this issue.

The destruction process takes place furnaces with temperatures of 1,000 degrees Celsius. The AND factory is equipped with high-sensitivity filters that prevent the exit of any products that may pollute the surrounding environment, or cause harm to any present individuals.

Narcotics found inside sheep guts in ....