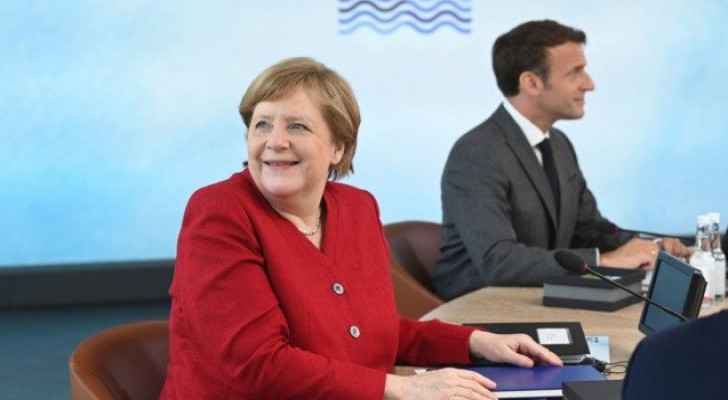 German Chancellor Angela Merkel and French President Emmanuel Macron called Friday for caution during European football matches in the face of the highly contagious delta mutant, and warned of the outbreak of the pandemic again on the European continent.

"We cannot pretend that the Corona pandemic is over," Merkel said at a press conference before a working dinner in Berlin with the French head of state.

The meeting between Macron and Merkel was one of the last before the chancellor's 16-year rule ends in the fall.

"When I see stadiums full in other European countries, I feel some disappointment," Merkel said, in an apparent reference to Hungary, led by nationalist Viktor Orban, the only country that organized matches without imposing any preventive measures in this league.

In response to a question about the potential risks associated with the semi-finals and finals due to take place at Wembley in Britain, where the delta mutant caused an increase in the number of injuries, Macron promised to remain "extremely vigilant."

The French head of state is the first foreign leader to be invited to the German capital this year, due to the health crisis.

The aim of the meeting is to prepare for the meeting of the European Council on June 24 and 25, as well as to discuss the development of the epidemic, in particular, the differences with Turkey and Russia, and the economic recovery.

Macron stressed that the implementation of the recovery plan "is a priority (...) in order to return to the pre-crisis growth path", perhaps around 2022.

An amendment wanted by France was suspended due to Germany's reservation to the "European Stability Pact" that set the debt ceiling for eurozone countries, until 2023 due to the epidemic.

Macron and Merkel sought to show their understanding during this press conference and to address each other by their first names.

Macron's ex-bodyguard on trial over beating of protesters

Macron's ex-bodyguard on trial over beating of ....

Macron's ex-bodyguard on trial over beating of ....

Macron's ex-bodyguard on trial over ....