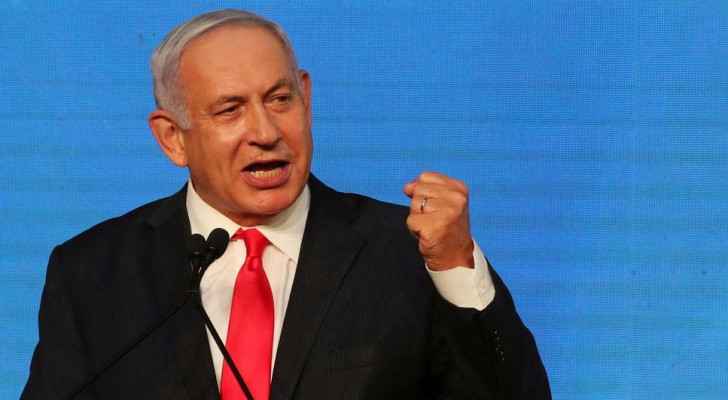 Israeli Occupation opposition leader Yair Lapid hopes to win parliament's confidence after he succeeded forming a government coalition Wednesday, within which he hopes to unseat current PM Netanyahu after 12 years in power.

The centrist Lapid, the opposition leader and Netanyahu's rival, had until midnight on Wednesday to inform President Reuven Rivlin that he had amassed a majority of 61 out of 120 lawmakers in parliament and reached an agreement on a "change" government.

"The specter of a fifth vote is something no rational Israeli can hope for," the Jerusalem Post said in an article published on Wednesday night, warning that "the hardest part is only in its beginning" in light of the "different ideologies and philosophies" that make up the coalition.

"The nascent government has the ability to mend mistrust, heal divisions between different societies, and lead us down a path that is less chaotic and more stable," the newspaper said.

Parliament may hold a vote of confidence next week at a date that is still unknown.

In recent days, the Israeli Occupation media reported that Likud Knesset Speaker Yariv Levin may be tempted to delay organizing the vote for a few more days, in the hope that at this time there will be splits in the anti-Netanyahu camp.

Meanwhile, Netanyahu, his right-wing Likud party and his lawyers are making efforts to try to prevent such an agreement from getting approval by parliament.

- An Arab party in the coalition -

Lapid's obtaining the green light from Parliament will end a political crisis that has been going on for more than two years in the Israeli Occupation, where four elections have so far not led to the formation of a stable government.

Lapid's team published a photo of the coalition agreement signed by the leaders of eight parties that could mark a turning point in the Israeli Occupation's political history. Two of these parties are leftist, two center, and three are right-wing and an Arab party.

The last time an 1948 Palestinian party supported a government - without participating in it - dates back to 1992 during the era of the "peace government" headed by Yitzhak Rabin.

Lapid assured the Israeli Occupation president that "this government will be at the service of all citizens of Israel, including those who are not members of it, and will respect those who oppose it, and will do everything in its power to unite the various components of Israeli society."

President Rivlin replied, "I congratulate you and the party leaders on this government agreement, and we expect parliament to meet as soon as possible to ratify this government."

In a tweet on Twitter, Benny Gantz praised Defense Minister and former Netanyahu rival for the premiership on his way to Washington to discuss Iran. "A night of great hope," he wrote.

In contrast, the Communist Party and the Democratic Front for Peace and Equality objected to supporting the government led by Bennett.

The two 1948 Palestinian parties said in a joint statement that "the Southern Islamic Movement's support for a government that is not committed to stopping the ethnic cleansing in occupied East Jerusalem and the violations and provocations in Al-Aqsa Mosque, after it was rejected by the right, legitimizes the policy of denial of the rights of the Palestinian people."

The two parties stressed that "the overthrow of Netanyahu does not legitimize support for a government headed by Bennett," which they considered "a right-wing government par excellence in its composition and political line that does not present a real fundamental change from Netanyahu's government."

They stressed that "real change is not reduced to replacing Netanyahu, but rather to changing Netanyahu's policy instead of the policy of deepening the occupation, settlements and racism."

The head of the Arab Democratic Gathering Party, former MP Jamal Zahalka, also attacked the participation of the southern Islamic movement, considering it a "sin and not just a mistake (...) and a deal at the expense of the national position, rights and dignity."

At the beginning of May, President Yair Lapid commissioned the formation of a government after Benjamin Netanyahu failed to mobilize a right-wing government after the March elections, which were the fourth in two years.

From the status quo in the conflict with the Palestinians to economic recovery and the status of religion: everything on paper is dividing the diverse coalition united only by the desire to topple Netanyahu, who came to power 25 years ago, from 1996 to 1999 and was re-elected in 2009.

On trial on charges of corruption in three cases, Netanyahu is the first Israeli Occupation prime minister to face criminal prosecution while in office.

He is supposed to become an ordinary MP again and will not be able to use his influence to try to pass a law to protect him from his legal troubles.